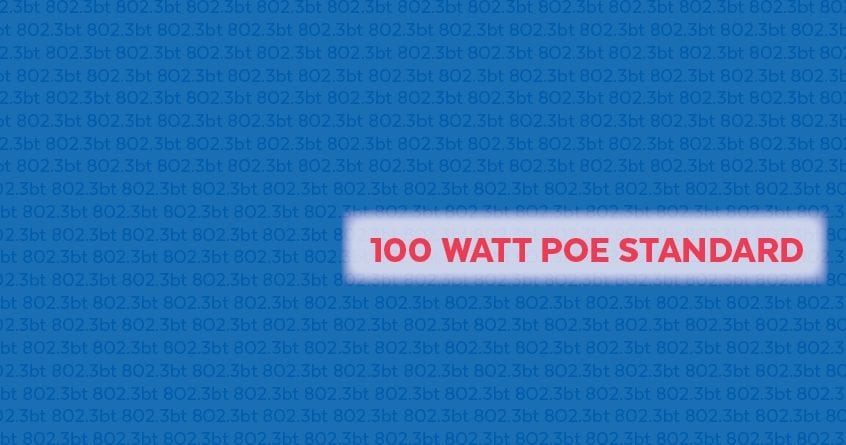 The maximum power output per port of PSE (Power Sourcing Equipment) – the components that supply power to PDs (Powered Devices) – has been improved over the years to keep up with the ever increasing demand of new technology.

Likewise, as the PoE market continues to grow and IoT (Internet of Things) is becoming more popular, the universal PoE standard has also been improved and increased to accommodate the expanding industry.

If a device is “PoE compatible,” it adheres to the universal standard for PoE, which up until recently was IEEE 802.3at. The PoE standard ensures all PoE devices are on the same page, so they can be safely connected to other PoE devices on the network.

Evidently, not all devices on a network are PoE compatible. According to the PoE standard, all powered devices must display a signature to the PSE to make sure it is indeed PoE compatible. Otherwise, the PSE will not supply power to the device.

It was a long time in the making, but the latest PoE standard – IEEE 802.3bt – was finally ratified and approved on September 27th, 2018. The new standard supports 100W of Power over Ethernet, enough to operate the newest and most power hungry devices on the network.

The ratification process took a bit longer than first expected because IEEE wanted to make the new standard backward compatible with all PoE devices.

All PoE devices must adhere to the universal PoE standard. This way, all PoE devices can properly communicate with one another on a network, even if some devices on the network aren’t PoE compatible.

For example, if you connected a PoE Ethernet cable for gaming to a console, it would supply only data, and not electricity. Since the console is not PoE compatible and cannot send a digital signature to the PSE for power, your switch will know not to send electricity down the line.

As of January 2019, there are four PoE types – in this section, we’ll be taking a closer look at each one of them.

The first PoE type is normally referred to as – yep, you guessed it – PoE. It conforms to the IEEE 802.3af standard and it can supply maximum power to port of 15.4 Watts. It was an early PoE standard created back in 2003, meant to supply electricity to low-powered devices on a network, including VoIP phones, sensors, wireless access points, and simple static surveillance cameras that can’t move from side to side or up and down.

The second PoE type is commonly referred to as PoE+ and PoE Plus. Type 2 PoE conforms to the IEEE 802.3at standard, and it can supply maximum power to port of 30 Watts. This newer standard is backward compatible, meaning it also supports Type 1 PoE devices. Type 2 PoE can power PDs such as wireless access points with six antennas, biometric sensors, LCD displays, and more advanced cameras that have pan, tilt, and zoom functionalities.

Type 3 is the third PoE type, and it is also known as 4-pair PoE, RP PoE, PoE++, and UPOE because it uses all four pairs in a copper cable. It conforms to the IEEE 802.3bt PoE standard, and it can supply maximum power to port of 60 Watts. PoE++ has enough power per port to operate management devices and video conferencing systems.

Commonly referred to as higher-power PoE, Type 4 also conforms to the newest IEEE 802.3bt standard, but it can supply maximum power to port of 100 Watts in order to accommodate the growing power requirements of network devices and IoT. It can even support power hungry laptops and TVs.

As mentioned above, the newest 802.3bt standard calls for both Type 3 (60W) and Type 4 (100W) power variants. Now, you can carry nearly 100 Watts of electricity over a single PoE cable.

Although 100W of PoE power may seem excessive, it’s actually quite the contrary – with the growing IoT market and the emergence of smart homes and buildings in addition to rising power demands, 802.3bt has arrived in the nick of time.

100W PoE is a stepping stone along the path towards making complex networks in smart homes and buildings a reality. Smart buildings would be far more expensive to design – let alone build – without high power PoE capabilities.

IEEE 802.at and 802.3af standards used a four-pair cable, but the old standards only called for power delivery from two of the pairs. It used either pairs 2 and 3 or 1 and 4, but not both pairs at the same time. 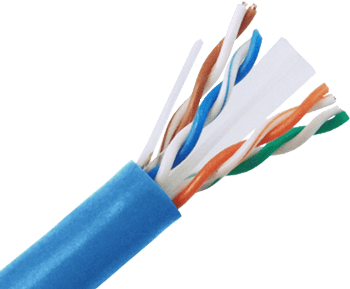 Conversely, IEEE 802.3bt uses all of the pairs in a four-pair cable, which allows current to flow evenly among them. This innovation drastically improves the amount of power that can be transmitted over a single PoE cable, in addition to the higher data rate of up to 10GBASE-T.

If you’re using the new standard, you won’t be able to use CAT 5e cabling anymore. Instead, you’ll have to upgrade to category 6A 4-pair balanced twisted-pair cabling in order to achieve the best possible thermal and power efficiency. This upgrade is necessary because less power is dissipated in a CAT 6A cable, meaning your PDs (Powered Devices) will receive more power as opposed to it being wasted due to the inefficiency of an old CAT 5e cable.

If you’re using power hungry devices, you may even want to consider a special CAT 6a cable designed to withstand the extra heat generated when cables are bundled together.

Upgrading your network to 100W PoE Power Sourcing Equipment, devices, and CAT 6a cable is the only surefire way to future proof your network for the growing power demands that are already at your doorstep.