HomePoE 5 Things You Need to Know About PoE Switches 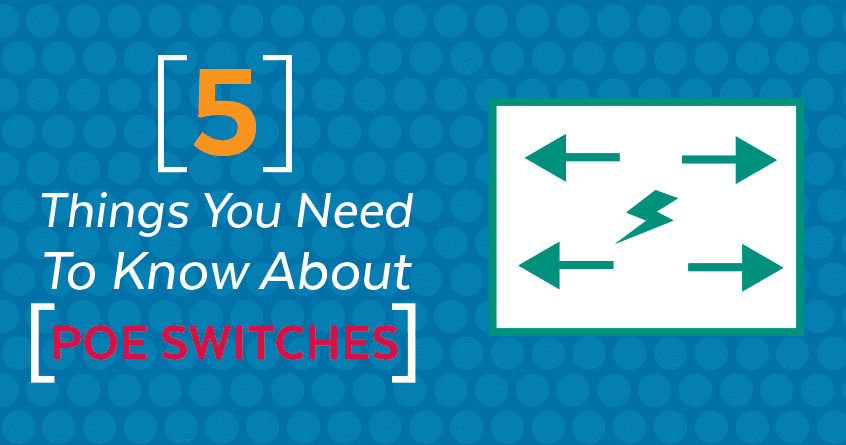 Due to the advancement of technology, there are new needs within telecommunications for the establishment of an efficient network. One of the most critical elements is the network switch because it allows the network to operate smoothly. While you can use a regular network switch, PoE switches may be more beneficial. Here’s what you need to know.

In most cases, when connecting to the network, a device must have a power cord and network cable. A PoE network means that only one cable is needed for power supply and data transmission to devices. To do this, you either need a PoE switch or a normal switch and a PoE injector/splitter. Your specific needs are based on the power needs of your devices. Transmitting power using Ethernet cables is standardized by IEEE 802.3 to create four categories. Most importantly, PoE shows its value for those devices that need power and data transmissions. Due to the advancement of the Internet and IoT, the number of devices requiring data that can be controlled remotely has increased significantly and this number is expected to continue to grow. The rapid expansion of connected devices means that PoE will be more important for most infrastructures.

A PoE has Three Common Applications

It’s important to note that PoE is not limited to the applications listed here, but these are the three most common. First is the original PoE device — the VoIP phone. The VoIP phone allowed for the use of PoE to allow for a single connection to have power and data transmission. Second is the IP camera, which is critical in security camera technology, where PoE helps in ease in repositioning and fast deployment. The third is the wireless access point, where remote positioning can be done. Unsurprisingly, smart home automation is benefited by PoE.

There are differences between regular and PoE switches, but the most significant is in relation to accessibility. The regular switch doesn’t let you supply power using an Ethernet cord. However, you can connect a regular switch to a PoE injector/splitter. A PoE switch has a lower cost because you don’t need extra power cables, which helps you keep your infrastructure costs lower. Also, Ethernet cables aren’t as expensive and frequently already installed. Even if they’re not, it is still pretty cheap to install them because installation doesn’t require an electrician. This type of network allows for greater adaptability for connected devices, which means that remote locations or areas without power sources can be covered more easily. Thus, a PoE switch maximizes power resources because power consumption is automatically detected so only the amount needed is supplied, minimizing power waste. Most importantly, PoE switches allows you to stay afloat in an ever-changing world where technology is advancing rapidly.

None of the above means that PoE is perfect. There are cases where a regular switch is better. For example, you can only transmit data over 100 meters with a PoE, which is problematic in large facilities. However, if you have an extender, data transmission can go up to 1,219 meters. Moreover, while technology is advancing, not all technology has reached the status for PoE. So, if your device isn’t PoE compliant, you’ll need an injector/splitter. It’s also important to note that PoE is still advancing. Currently, they can power computers and televisions, but if you need a lot of power, you may not be able to cover it with PoE.

There are several types of PoE switches: (1) unmanaged, (2) smart, and (3) managed. For most people, a managed PoE switch is a great option because it gives the owner much more flexibility and control over the network. However, it’s important to know about all of them. The unmanaged PoE switch is beneficial for home networks or small business offices. This type of switch can’t be modified so you don’t need to worry about enabling or disabling interfaces. They work best for places with less than 5 to 10 computers. However, there aren’t any security features with the unmanaged PoE switch — which can be a major drawback. The smart PoE switch is used for smaller networks too, but is complete with security features. The capabilities of these switches is limited. They offer QoS and VLANs, which is great for labs and small workgroups. You’ll be able to set up a virtual network, but there isn’t anything overly sophisticated for monitoring or troubleshooting. The managed PoE is used for data centers and larger networks. It is the most sophisticated because it has full management capabilities and security features. Therefore, network security, control, and management is high and are beneficial for operations that need 24/7 monitoring. However, these are the most expensive PoE switches, yet allow for scalability for network growth.

PoE switches are great for advancing companies and expanding networks. Be sure to get the one that’s most effective for you.