HomePoE Do I Need A Managed PoE Switch? 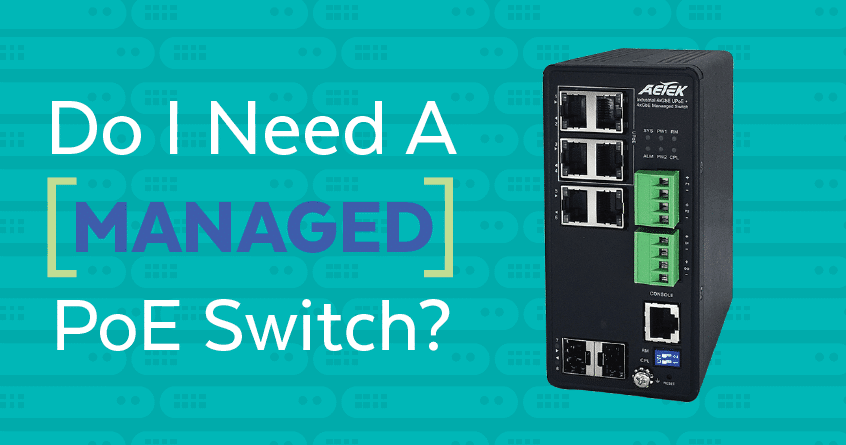 It’s not any port in a storm when you’re dealing with networks. Data has to get to its correct destination with maximum efficiency. Managed PoE switches give you greater control over your network than by using an unmanaged switch. Not only can you control how your ports are configured, but how data travels, how fast it travels, who has access to that data, and the ability to fix network errors remotely.

Consider your budget, network size, and speed, security and configuration needs before choosing either a managed or an unmanaged PoE switch. Keep in mind, a managed switch acts as a brain of your network whereas an unmanaged switch is basic–no bells, no whistles. Since managed switches are more expensive and need oversight, know the differences between the two before you choose.

There are two kinds of managed PoE switches. They allow you to customize your port configuration as needed to your LAN so that you get the best performance when and where you need it. You use managed PoE switches when milliseconds count, where security and remote accessibility are paramount. 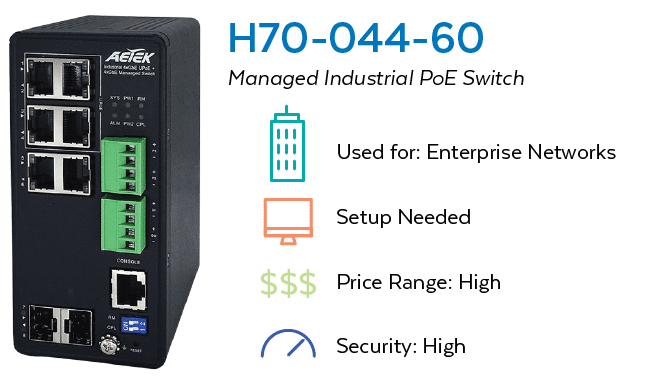 Applications include both metro-wide transportation projects and where mission-critical configurations and security are optimal needs, especially over fiber-optic networks that require remote management to control downtime.

Commonly known as “plug-and-play” switches, unmanaged switches are simple and need no skilled management. There’s no particular set-up. They simply allow devices to communicate with each other. Unmanaged PoE switches have lockable port covers for basic security for small networks and temporary network workgroups. Quality of Service (QoS) is built-in so you know its fixed ports are working optimally.

Unmanaged PoE switches do not have IP addresses like managed switches, only Medium Address Control (MAC) addresses. There’s no prioritization regarding data packets and each packet simply goes to its pre-configured MAC address. They often connect edge devices to network spurs and simplify the installation of wireless access points (WAPs) and IP cameras. One device per port. Note that they don’t support IGMP and can confound networks as they treat multicast and broadcast traffic the same. 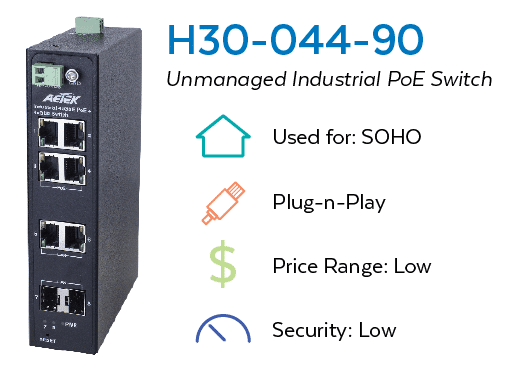 Managed Ethernet Switch or No?

Managed switches can be used as unmanaged switches, but not visa-versa. Whether you’ve set up a network of IP cameras to secure your business, networking your home’s smart devices, or are configuring an enterprise network utilizing industrial departments at varying locations, you have to consider the following:

Managed PoE switches provide major security as you can create access controls that keep threats at bay. This is especially important when you’re updating Army network switches like project manager, William “Rich” Richardson and his team does.

Richardson says that “by increasing the speed and bandwidth of the infrastructure—from 1 gig to 10 gigs, in most cases, is pretty significant.” He adds that “going from old, obsolete data networks to the latest and greatest state-of-the-art technology being deployed—is really rewarding. It’s great seeing these systems being brought out of the Dark Ages and into the light.” Military and industrial applications use managed PoE switches as they have a large network that needs oversight. An unmanaged switch will suffice if you’ve just a few devices and a small network that doesn’t need oversight.

According to Industry Herald 24, touting a 2020 Report from Report Consultant, the “global managed Ethernet switch market is projected to grow at a CAGR +12% during the forecast period 2020 to 2028.”

What does this mean for your decision whether or not to use a managed PoE switch for your network? Scalability. If the managed Ethernet switch market is growing at a rate indicating that its performance is optimizing networks across the globe, it is more cost-efficient to focus on scalability than scrapping legacy systems.