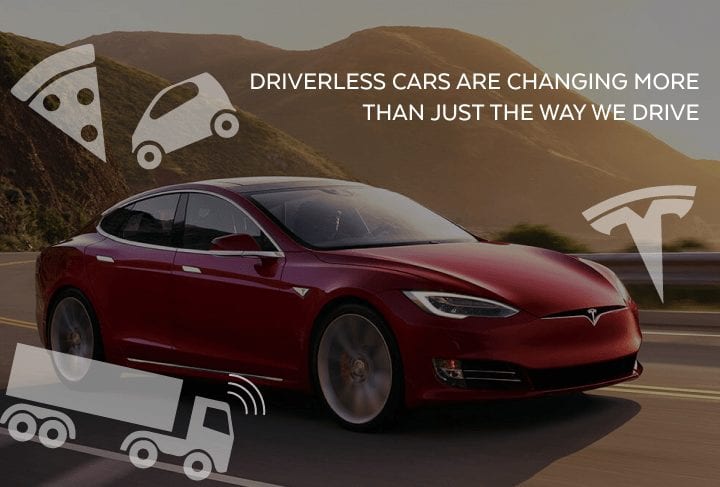 Since our January 2017 article, Autonomous Cars Are Reshaping the Way America Does Automotives, a lot has happened. We here at Versatek, have been following the developments carefully, especially since we’re playing a participatory role in a few exciting pilot projects with automakers.

Though still in its early stages, the autonomous car industry may be poised for mainstream breakthroughs sooner than you might think.

We fully expect early adopters to be posting pictures on social media of their hands off the wheel in the next couple of years. There will also be no shortage of tech writers and experts sharing their enthusiasm for autonomous cars across all sorts of mediums. In short, it’s going to be quite a show.

So, how far down the road are autonomous car manufacturers and service providers in their steady progress toward full adoption?

Believe it or not, some Michigan pizza enthusiasts have already started getting their Domino’s delivered via self-driving cars. The New York Times, The Hill, and Wired each published articles pointing to a rollout of a driverless car pizza delivery collaboration between Ford and Dominos, which is also headquartered in Ann Arbor, MI.

“Domino’s pizza plans to start testing deliveries,” said the Times, “using a self-driving Ford Fusion sedan outfitted with enough sensors, electronics, and software to find its way to customers’ homes or offices in a section of this city 40 miles west of Detroit.” 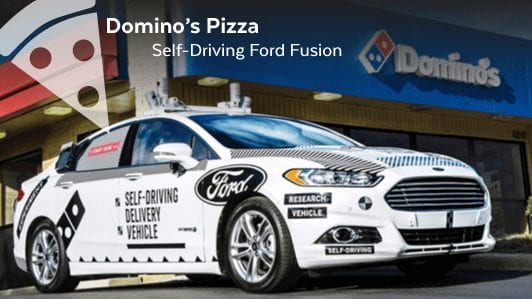 Customers will then go out to their driveways or curbside and meet the car. Next they punch in the last four digits of their phone number into a tablet, and the rear window will lower.

“Nobody really knows what’s going to happen,” said Dennis Maloney, chief digital officer for the pizza delivery giant. “There’s no human interaction. What happens if they approach the car from the wrong direction?” This is just one of many questions.

But trial by fire is often the best way to get a feel for how technology works in the real world. So the plan went forwards.

Of course, there’s a bit of a catch.

For safety reasons, a live driver will be seated in the driver’s seat. There are a few reasons, primarily that if an automotive or electrical malfunction were to occur, having a driver present would reduce the risk of any catastrophic harm occurring.

In the background as well, Ford engineers will be carefully monitoring everything coming in from the electronics and computers during the experiment.

Ultimately, we’ll have to wait and see just how valuable or important the pizza delivery experiment will be. But make no doubt, it’s an indication of things to come. Autonomous cars are on their way, and their applications may easily exceed what you first thought.

While Ford has come to driverless vehicle development a bit “late”, this is definitely a step in the right direction. They’re currently aiming for a full production release sometime in 2021.

As driverless cars are a new approach to driving, some think the innovation should not stop there. How these cars are built also needs a little bit of a rethink!

One surprisingly innovative feature the Tesla released in June 2017 is the “Hardware 3” camera and radar technology. This technology can upgrade models produced from October 2016 onwards, and help open the door for a purportedly full self-driving solution.

According to Engadget, the Tesla S and X production units already have a hardware suite sufficient for full automation. All that’s required is a software update. Thus every HW 2.0 or later car should still be able to achieve full autonomous driving in the near future with non-hardware upgrades.

It’s worth noting that detractors claim this upgrade does not deliver on the promised full self-driving capabilities. The argument being that it is a solution “dependant on extensive software validation and approval”

Of course, most jurisdictions still do not allow autonomous cars to drive without human guidance in the first place. So for these municipalities, the point is a bit moot.

Passage of the SELF DRIVE Act

In a separate story, the U.S. House of Representatives just sent a bill to the Senate allowing autonomous vehicles on regular roads. Engadget reports that the SELF DRIVE Act unanimously passed the house in a bipartisan victory.

This should allow for much faster progress on the legislative front and is a big win for the autonomous car industry on the whole. This act gives manufacturers in the midst of ongoing research and development the opportunity to prove that self-driving car technology is safe.

SELF DRIVE (Safely Ensuring Lives Future Deployment and Research In Vehicle Evolution Act) gives research teams the ability to test an initial 25,000 cars that do not meet https://www.congress.gov/bill/115th-congress/house-bill/3388/text current safety standards, and up to 100,000 vehicles per year for the next 3 years driving on regular roads. Safety standards that apply to cars with human drivers–that include things like steering wheels–don’t necessarily apply in the instance of computer driven vehicles.

Reuters reports that under the bill, the onus is on the automakers to secure permits and submit their findings to regulators. Self-driving car makers will continue to do their research and testing on a state-by-state basis.

Stay tuned to see what happens in the months to come, we’re expecting more big news!

Who Else Has Jumped on the Bandwagon?

As you may or may not already know, it’s not just automakers that are diving into the driverless car revolution. A number of other big-name companies and startups are dipping their toes in the water as well.

One reason being the promise of safer roadways with the potential for less human error is going to actually save lives.

Here are a few companies moving on driverless technology.

Not surprisingly, Amazon is one company looking to deploy driverless-trucks in the “last mile” of their supply chain infrastructure. As their manner is, Amazon is aiming to change the future of freight transportation.

“We may debate whether it’s 5-years or 10-years away,” says Matt Parry, Senior Vice-President of Logistics, Werner Enterprises, “But moving from Level 1 to Level 5 (the latter being a fully-autonomous vehicle), is absolutely something trucking companies welcome.”

One unexpected scaleback in the driverless industry comes from Apple. Apple was once embroiled in project Titan, which was going to be their next big thing. A fully fledged driverless car project, manufacturing and all.

More recently however, they’ve shifted strategies and have instead decided to focus on autonomous systems. Tim Cook, Apple’s CEO, calls autonomous car systems “the mother of all AI projects.”

The tech leader says his company will expend their resources providing technology to help other manufacturers develop their driverless models.

NXP Semiconductors is set to outperform NVidia and other competitors with its plug-and-play, open-source Linux based technology.

It’s actually one of the few, fully automated Level 4 products ready to take the market. It definitively sets NXP apart as an innovator in the driverless space.

Level 4 is only one step below fully driverless. The BlueBox has everything in one package. This approach is in lockstep with the general trend of late. Technology companies in all sorts of industries are looking for novel ways to create one-stop-shop solutions for complex problems.

After all, who wants to deal with the hassle of building custom integrations if it’s not necessary?

Expect to see many more breakthroughs in automated technologies over the coming months and years. We’re particularly excited to see what innovative supply chain business models will arise.

The driverless car is just another example of how connected devices are transforming both how we live and how we work.

We’re proud to be a part of this technology wave and will be covering it further as we move forward. So keep your eyes peeled for more breaking news about autonomous cars and other developments pertaining to the Internet of Things.