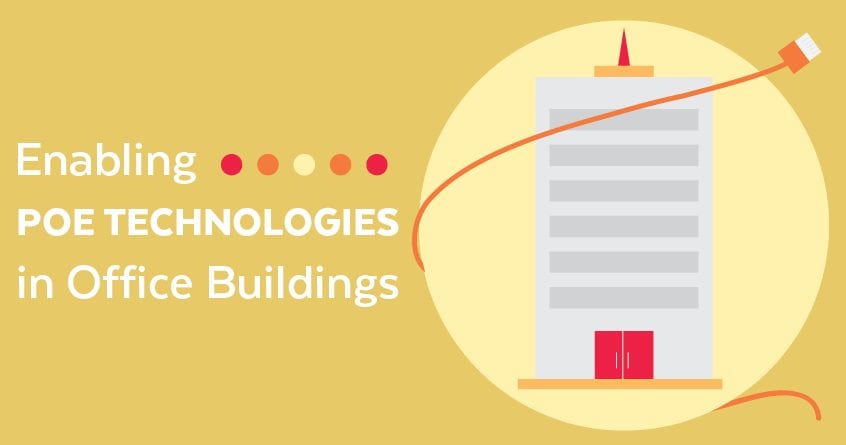 Power over Ethernet delivers both electrical power and communication signals via the same Ethernet cable. This advancement in technology opens the door to a whole host of new networking possibilities, particularly in commercial settings such as office buildings.

As the Internet of Things (IoT) is being adopted at an increasing rate, PoE is being utilized by the most advanced networking professionals around the world to power devices in a plethora of different scenarios, from hotels and retail stores to office buildings.

PoE is far superior to traditional networking solutions that require two separate cables – one for power, and one for data – as it is faster, more flexible, efficient, and lastly, easier to install.

In this article, we’ll be taking a look at the applications of PoE technology in modern office buildings – more specifically, how engineers are utilizing the technology to increase building efficiency while simultaneously making a safer, more comfortable, and more productive working environment.

In fact, the latest and greatest smart building concepts designed to bolster energy efficiency and boost productivity are driven by PoE technology.

Looking to the future, operational technology (OT) is only going to continue making use of PoE in a plethora of different commercial settings, from offices and factories to warehouses and power plants.

Architects, engineers, and builders are working in conjunction with information technology (IT) personnel to bring PoE networks to the forefront of everyday life in commercial environments. The forward-thinkers in the networking space have recognized the benefits of adopting PoE infrastructure, as it is a key asset for the proper implementation of IoT in smart buildings.

These advanced technologies are responsible for network connected lighting solutions, in addition to the increased energy efficiency and the manageability of automated commercial networking systems.

Thanks to the adoption of the new IEEE 100W PoE standard, a ton of new PoE applications have emerged, as more power-hungry devices are now compatible with PoE technology.

By utilizing all four twisted pairs in a PoE cable, the 100W PoE standard can deliver more power than traditional PoE and PoE+, with improved efficiency and reduced channel losses. Multiple devices can be optimized with the low-voltage PoE cable infrastructure by linking them together in a daisy-chain, further reducing power consumption and installation overhead.

Through the use of 100W PoE, devices like digital signage displays, point-of-sale systems, LCD televisions, and computer monitors can be powered with PoE cables.

Evidently, these devices are commonplace in modern offices.

PoE LED lighting fixtures are transforming the way engineers and electricians install lighting systems in offices and other commercial settings. Conveniently enough, even legacy lighting fixtures in old buildings can quickly and easily be retrofitted with LEDs and sensors that are compatible with PoE smart control features.

Moreover – since PoE networks don’t require the installation of power outlets near each device endpoint – installing a PoE system is much faster to install and deploy than legacy networks. This means commercial buildings are ideal candidates for PoE lighting and automation, as it can be quickly installed and easily retrofitted into existing network configurations.

For example, smart sensors connected to the building’s network can be used to turn lights on and off when someone enters or exits a room, when a door opens or closes, or even via pressure sensors in the floor. The possibilities are endless.

Thanks to PoE’s ability to distribute power and network signals to devices, lights, motorized blinds, sensors, and other devices are now becoming digital devices that can be configured, grouped together, and controlled in one central location on the network.

As far as manageability is concerned, network controlled lighting with PoE and IoT allows building operators to take full control of their lighting systems. The ability to seamlessly migrate lighting controls to an IP-based framework is a tremendous advantage. Lighting is being transformed into a service that IoT-enabled buildings can control along with other building functions.

PoE switches are being used to power and connect sensor nodes, wall dimmers, luminaires, and other local devices in an office building. Each switch is connected to these devices with a traditional Cat 5 or Cat 6 cable, which makes for easy power distribution to local devices. 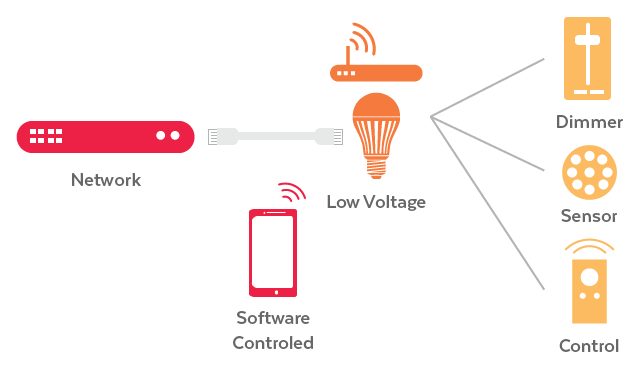 Better control aside, the synergistic integration of PoE lighting into the building’s network also leads to colossal energy savings, improved occupant comfort, and even improved security.

Thanks to PoE lighting’s outstanding output per watt of power, using PoE LED lighting fixtures to replace traditional fluorescent lighting is incredibly cost effective when compared to other lighting technologies.

All in all, PoE technology in combination with IoT is revolutionizing the commercial industry, especially in office buildings. Installing PoE technology is cheaper, more efficient, and more effective than legacy networks.

PoE also is instrumental in creating safer, more comfortable, and more productive working environments in office buildings. Even better, engineers can use the data aggregated by sensors in different building zones to optimize the network, which can then be used to further improve the network and reduce power consumption.