A team of NASA scientists has turned to Ethernet to capture clear video footage on Mars. The use of a camera and a laser mounted on the front bumper of an autonomous or semi-autonomous planetary rover called the K-REX2 has solved image quality in airless environments. Power over Ethernet (PoE) technology connecting the camera and laser to sensors, takes advantage of power and data delivery capability over a single cable to run these low-powered smart devices (PD) in space.

Not a part of the recent Mars 2020 mission, this nimble little vehicle is an exciting addition to upcoming missions to the moon and beyond. Ara Nefian, the Senior Scientist from Stinger Ghaffarian Technologies (SGT/KVR) and NASA’s Intelligent Robotics Group (IRG), based at Moffett Field close to Silicon Valley in California, have taken on the task of developing of the K-REX2 rover.

SGT is an award-winning, nationwide service provider of high-value engineering, mission operations, scientific, and IT solutions to the federal government. Based in Greenbelt, MD, the company has received excellence awards in 2001 and 2005 for their work as contractors at the Goddard Space Flight Center. 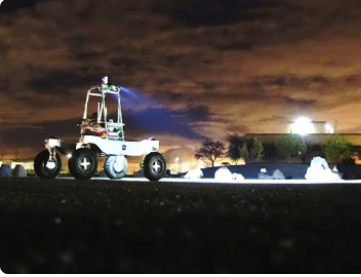 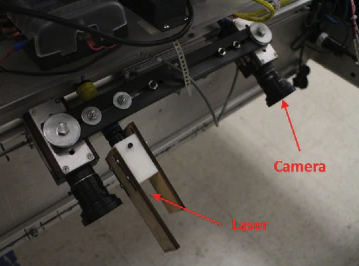 As of June 2020, the team has been running night experiments on the Roverscape test facility to finetune the navigation setup, which comprises two main components. The multi-dot laser projector and camera, seen above, are designed to provide the granularity needed to avoid obstacles over rugged terrain.

Another of the challenges these technologies address is the weight constraints of the navigation system. These lightweight, low PDs are more efficient to transport to these faraway locations than older technologies. These systems are always on, making them ideal candidates for Ethernet power delivery. They can navigate using sensors to detect obstacles, even in areas that are in total darkness.

Over the years, NASA has sent a total of five rovers: Sojourner, Spirit & Opportunity, Curiosity, and Perseverance.

1. The Sojourner Rover was part of the Mars Pathfinder Mission

NASA’s Opportunity Rover Mission lasted 15 years, far beyond the original 90-day plan. The rover communication system failed as the result of a severe Mars-wide dust storm. Its final communications came on June 10, 2018. Thanks to this mission, scientists found proof that ancient Mars had water. The rover lasted 60 times longer than designed.

More About The Perseverance

The Mars 2020 mission launched on an Atlas V-541 from Cape Canaveral on July 30, 2020, carrying the Perseverance, a large roving vehicle sent to Mars surface to conduct mobile studies of the surface environment. The rover will review habitability factors, past life, and collect samples to be evaluated and provide insight to help NASA prepare for future missions. 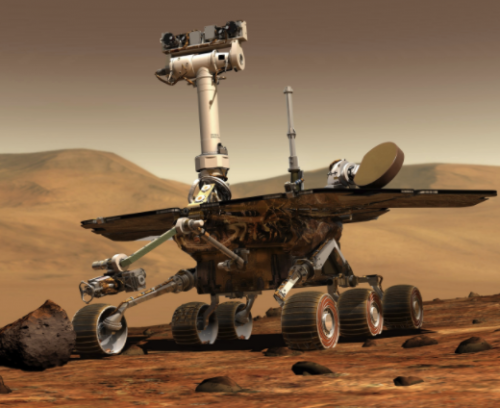 In contrast to the K-REX2, the larger Perseverance rover has an equipment deck that will deliver the Mars helicopter to a separate area for test flights. NASA teams have equipped it with the following instruments for scientific investigation.

The MOXIE and the electronics required to support test instruments are mounted on or below the rover equipment deck.

The Mars 2020 spacecraft will land in the Jezero Crater on the Mars surface on February 18, 2021. Perseverance will drop the Mars Helicopter and move aside for an experimental technology test flight that involves hovering three meters above the surface.

Though deployment of the K-REX2 is still in the future, it is interesting to note the capabilities it will need to carry out its mission. The Atacama Rover Astrobiology Drilling Studies (ARADS) team is developing its plan for K-REX2 drilling on Mars. Between 2016 and 2019, ARADS Teams have held yearly, month-long field tests in Chile’s Atacama Desert, one of the places closest to a Mars-like environment on earth. They are using these site visits to develop strategies for collecting and analyzing samples.

Soil samples will also be scanned for biochemical analysis. These instruments will look for molecules that provide tell-tale biomarkers that some form of life existed on the planet.

Other Obstacles That Factor In When Roving On Other Planets

There is an impact of temperature extremes and the dynamic range between darkness and light on sensitive equipment. Airless environments are also asteroid prone. Earth’s atmosphere provides viscous drag as objects pierce it. The energy density is sufficient to cause atmospheric molecules to dissociate and component atoms to become ionized on the way down to its surface. Lunar, asteroid, and other planetary surfaces have thinner or no atmosphere and are less protected. There’s also the problem of jarring that can occur as extra-terrestrial vehicles navigate rugged, uneven, and even treacherous surfaces.

The ability to capture images in light extremes presents another issue. Anyone who has taken a photo when the light was too bright or too dark, will understand the challenge these types of images present. The solution is a narrow band filter on the Osela series laser that doesn’t pick up light frequencies outside of the laser’s wavelength.

VisionSystemsDesign reports the K-REX2 camera system developer is AlliedVision, a company out of Stratroda, Germany. The system, built around the 1388 x 1038 Sony ICX267 image sensor, can reach camera speeds of 18 frames per second (fps) and is a Power over Ethernet (PoE) technology.

NASA uses an industrial laser to emit uniform, evenly-spaced dots that blanket the terrain and allow the camera to register. These dots out-illuminate other light sources and give the rover detection system a read on the surface conditions in front of the vehicle.

The image stream from the camera showing the laser dots feeds into a software program that accesses an OpenCV library. The system determines potential obstacles by dot’s position along a horizontal line, leveraging any shifting of position to read changes to the surface using a detection algorithm.

Teams are testing the K-REX2 at a two-acre outdoor planetary terrain facility to simulate both day and night conditions to gauge image quality and safely navigate past boulders. 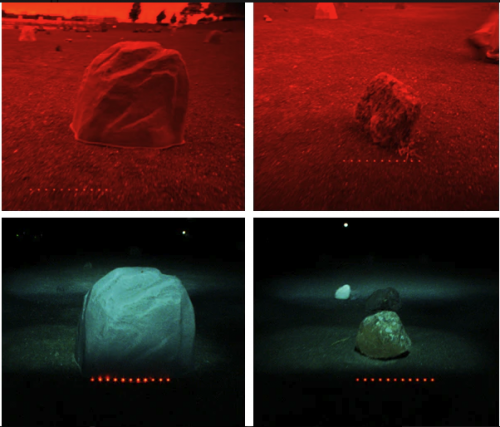 Rocks and surface images recorded in day and night testing scenarios for the K-REX2. Courtesy vision-systems.com.

Concluding Thoughts On Ethernet In Space

Low-cost delivery of power and data over a single cable–whether Cat5e, Cat6, Cat6A, or even fiber optic (most likely the choice in this implementation due to temperature extremes)–saves money and time.

Power over Ethernet makes sense. What started as a cost-effective technology to repurpose telecommunications cabling in commercial properties is soon to reach Mars. Not bad for something dreamed up by a few budget-conscious people looking to keep more of their hard-earned money.