HomeNetworking Is Ethernet King? You Bet It Is, And It’s Only Getting Better 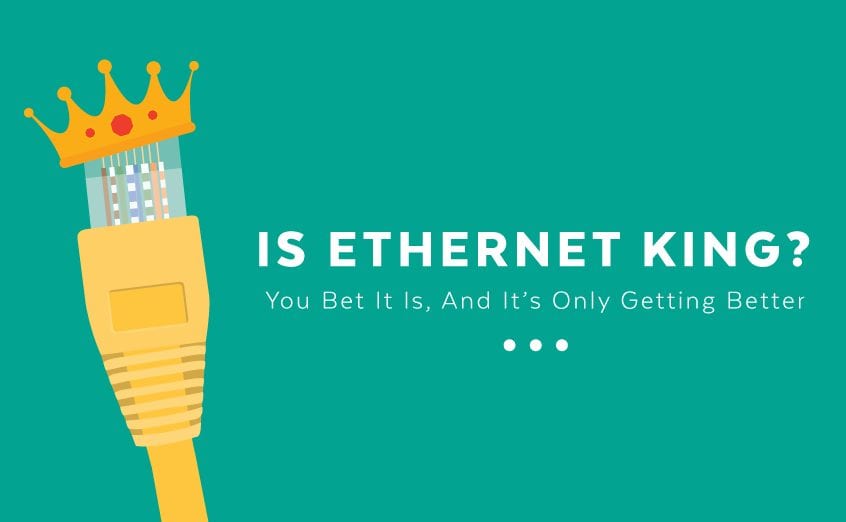 The Ethernet Alliance (EA) recently announced the 45-year anniversary of the Ethernet movement. And just for the record, they’re only getting started. The benefits of delivering low power and data delivery over one cable have not diminished. In fact, it’s safe to say these advantages are just as relevant in the age of green as they were back in their earliest days of development. The EA incorporated in 2005, in the State of California.

This article will discuss some of the takeaways from their May 2018 Global Consortium in Pittsburgh PA. The discussion about continuing interoperability centers on five areas.

As a review, interoperability is an industrywide standards-practice whereby consumers can interchange components from different vendors seamlessly. You’re not tied to one manufacturer. You have to give the manufacturing community credit for their practical boldness.

Anyone reading this who is old enough to remember the VCR versus the Betamax video player will understand the cost and frustration that resulted from multiple video player formats.

Proprietary thinking eventually backfired on SONY. While other manufacturers adhered to the VCR format, the Japanese tech giant watched their video player die a slow and painful death, despite the valid argument that Betamax video quality was better.

The importance of having one standard

One standard saves much grief. Industry-defined Power over Ethernet (PoE) certification ensures that all equipment is not only interchangeable, but also those performance standards are kept high.

Performance is only the half of it. The Ethernet Alliance has also led the charge on the naming and labeling for each generation of new Ethernet technology.

They have provided an industry-defined test plan that ensures that when a customer reads IEEE 802.3, they know they are getting the quality guarantee of PoE rated technology.

Further, each of these labels gives insight as to the type and class of equipment a buyer is getting.

Now let’s move on to the industries where these advances are playing out. 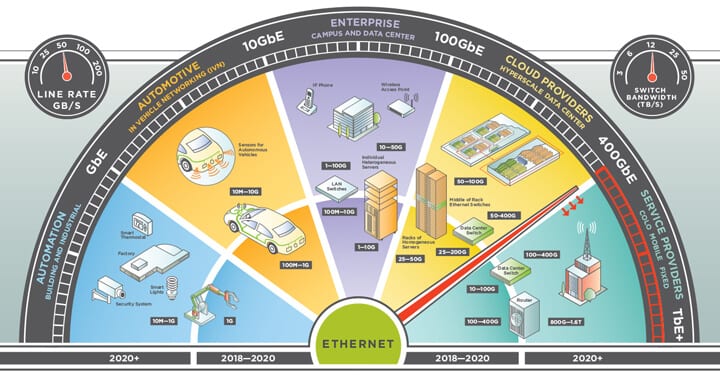 By 2019, the EA forecasts an impressive 500 million ports of Ethernet will ship in 119 million vehicles. Ethernet will allow all of the systems to “talk” to one another, and most especially the automated systems. That means, a lot of speed and a lot of throughputs to synchronize all systems together.

Ethernet is expected to surpass 400 Gbe. Essentially that car will be its own LAN reaching data speeds of 400 x the current 1 Gbps rate.

The bulk of all PoE purchases occur in business and campus settings. Hundreds of millions of ports ship each year, including BASE-T products. One clear advantage for implementing Ethernet in longstanding structures is the reuse of existing copper cabling found in the walls from the big telecom era.

An added 70 billion meters of cable has been deployed between servers and networks over the past decade-and-a-half through the use of twisted pair cable.

Ethernet in the cloud

Ethernet in building and industrial applications

Lean manufacturing continually looks for ways to measure performance. Cameras and sensors play a significant role. Installing these remote low-power industrial devices is why PoE continues to gain ground in this sector.

The goal is always increasing customer value. Ethernet brings greater efficiency with fewer resources. That’s what is driving the adoption of PoE in the industrial space.

The EA projects robust sales of 165 million ports in this sector for 2019.

The credit for increased Ethernet speeds rests squarely on the shoulders of the ISP provider. To enhance their competitive advantage, telecoms are also driving the integration of optical transport and wireless solution development.

As a result, Ethernet technology developers continue to strive for higher speeds, throughput, and distances to meet these demands.

It all boils down to one thing—customers want to stream video, and that appetite will only continue to skyrocket bandwidth consumption for the foreseeable future.

Along with reviews and discussions of current projects, and the installation of team members, the EA launched two new task forces during the consortium:

It will be interesting to watch these new projects unfold and witness the advantages from an end user perspective that these refinements will bring to these 5 sectors.

2 comments on “Is Ethernet King? You Bet It Is, And It’s Only Getting Better”