HomeTechnology G.fast: The Next Generation Broadband Solution that Makes Sense 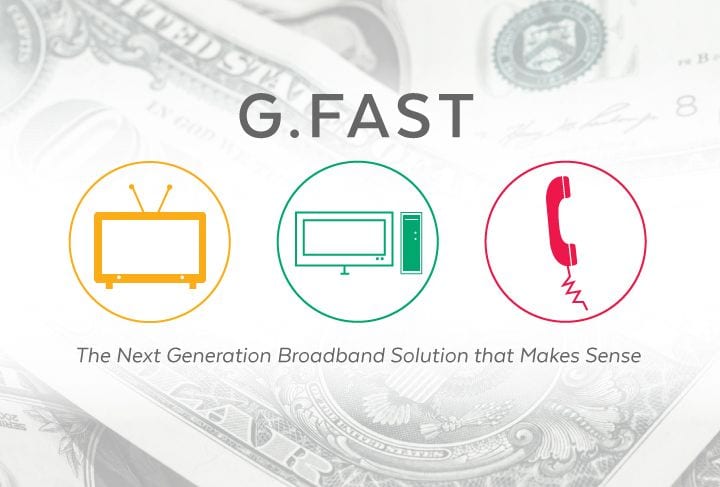 Broadband costs have been rising.

Many consumers find themselves wondering “how is it that Broadband Service providers can promise me sign-on packages of below $100 per month for bundled service, and in 2-years time charge upwards to $200 for the same service?”

Part of the reason, is that in most locations these providers already have cabling in place. All they really need to do is “flip the switch.” Yet, your monthly bill more than doubles in a couple of years for the same service. It hardly seems fair.

After all, if your Bundled Services aren’t expanding in alignment with your increasing bill, where exactly does all of your hard earned cash go?

One major place to look, is the upcoming switch to Ultrafast.

To qualify as “Ultrafast,” a network needs to attain speeds of up to 300Mbps.  In order to deliver this, Tier 1 companies are necessarily pushing to upgrade their infrastructure.

Costs for the upgrades, however, are mushrooming. Telecoms need capital to “restring” the last mile. This home-stretch is called Fiber-to-the-Home (FTTH), and as it turns out, fiber optic is costing more than many originally estimated.

So, users are ending up having to pick up the tab in the form of higher monthly service rates.

One example, Time-Warner Cable added an additional $840 to customer bills (per household) in 2015. Stretched out over 12 months is about $70 additional dollars per home. $100 becomes $170 and before you know it with tax, bills are cresting near $200 per month.

But cost isn’t the only thing affected by the fiber optic infrastructure improvements. The process is also taking a lot of time.

In recent years, entities like Google have slowed their Fiber installations.

“Google builds these networks out on an on-demand basis: Installation only begins once a neighborhood (or “fiberhood” as the company calls them) has passed a certain signup threshold,” explained John Paul Titlow, a writer for Fast Company.

So, in this instance customers do not get upgrades at all unless enough people sign up. There has to be an easier way to achieve ultrafast broadband.

And there is. Enter G.fast.

G.fast is great news for consumers. It solves the fiber optic problem by using existing copper infrastructure and can thus deliver ultrafast broadband in a lot less time and at a lower cost.

Here’s why you should be excited about G.fast:

Last mile installations occur between the distribution point and the home. In many cases, telecoms have already installed copper between those points. Why not make use of it for Broadband?

G.fast is an Ultrahigh Bandwidth technology. It replaces the SHDSL, ADSL and VDSL at the distribution point.

That means no re-cabling is necessary between the distribution point and the home or building. Currently devices of up to 24 ports are available, but companies like ADTRAN and Sckipio are looking to double if not triple port capacity for easy expansion.

Fiber optic cabling can cost anywhere from $1 to $6 per foot depending on fiber count.

But, the cabling cost is only one part of the picture. Even if the cabling itself was free, the project of installing it could still cost more than using existing copper cables. After all, you’d still need to hire technicians to run the cables from the distribution point to each endpoint.

And with the addition of ports at the distribution point, this type of installation is fast becoming more and more expandable. This will allows providers to keep up with the increasing demands of growing communities.

Since G.fast is a low power solution, it is a cool solution.

Since it doesn’t produce damaging high temperatures, metals and other components tend NOT to break down over time and weaken device efficiency. Less maintenance keeps costs down, which hopefully translates to less money spent by providers, and lower bills for consumers.

Further, lower power-usage and heat-production means that manufacturers can further reduce the footprint of enclosures themselves. That allows for more connection points per device.

These innovations are fast becoming a reality, as ADTRAN and Sckipio are already introducing waterproof Distribution Point technologies.

As one might imagine, waterproof enclosures means installers will enjoy far greater flexibility when considering location and placement. This includes placing units underground.

Flooding and other weather extremes do not impair the operation of G.fast distribution point components. Removing that barrier to install can dramatically speed up the time-to-market for these installations.

Last but not least, this further reduces cost for both installers and consumers.

Installers wanting to ride the G.fast wave will definitely want to get up to speed sooner rather than later.

According to Ronan Kelly of ADTRAN, the training window is much shorter than other technologies including Vectored VDSL. So that’s yet another benefit.

Incidentally, G.fast supports much longer loops than earlier technologies. Developers are seeing up to 400, 500, and even 600 meters. That flexibility will allow installers room to adapt cabinet placement to each unique proximity.
If you’d like to know more about this exciting new technology, stay tuned. We will be providing more in the coming months.