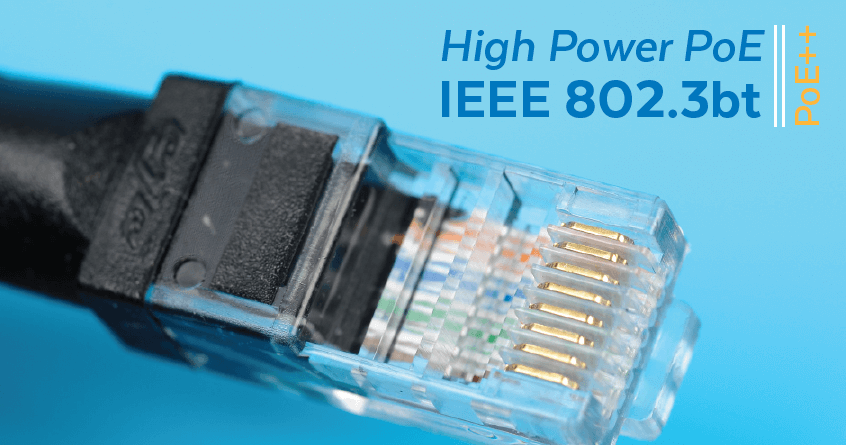 There is a relatively new Power over Ethernet (PoE) standard, and it has several names: IEEE 802.3bt, 4 Pair PoE, PPOE, UPOE, PoE++. (For this article, we will refer to this technology as PoE++.) This newest standard was ratified by the Institute of Electronics Engineers (IEEE) in September 2018 and has enabled organizations to save money and labor while making installations safer.

PoE 802.3af (also known as PoE or PoE Type I) was ratified in 2003 and supports a maximum power consumption of 15.4W. PoE 802.3at (also known as PoE+ or PoE Type 2) was approved in 2009 and delivers power up to 30W. These two PoE standards are compatible with devices such as IP phones, simple IP cameras, and indoor wireless access points. However, with new applications such as LED lighting, smart buildings, and the internet of things (IoT), there was a need for higher bandwidth and power supply.

Before the ratification of PoE++ (802.3bt), there were non-standardized methods to figure out this need for more power. According to SecurityInfoWatch, the leading trade association for global security providers:

In these scenarios, there were two options for manufacturers to engineer products:

It is important to note that neither of these options is compatible with standardized equipment.

The Latest Standard of PoE

What IEEE 802.3bt Brings to the Table

PoE++ allows the transfer of as much as 71W to a powered device (PD) with a maximum cable length of 100m (328 ft.). This increased power is delivered across all four twisted pairs. PoE++ devices offer high power and high speed at the same time.

PoE++ devices currently run smart buildings, healthcare facilities, and smart offices. To a lesser extent, PoE++ is even being used in smart homes. However, this power technology is proliferating in a few “niche” areas.

Industrial automation is growing rapidly and is driving many changes in networking as a whole. Manufacturers are demanding more responsive systems that cut costs and help push efficiency to the max.

PoE++’s higher wattage is perfect for massive sensors and the sophisticated controllers found on every factory floor. PoE++ powers workstations and human-machine interfaces (HMIs). It gives you the freedom to design the physical layout: power lines do not have to be run, and HMIs can be installed in previously considered inaccessible areas. Also, with PoE++, you have the option of splitting its power so more devices can be run by a single industrial Ethernet switch.

The IoT is no longer an emerging technology; it is generating large-scale data in many industries. In fact, there were 8.74 billion connected IoT devices worldwide as of 2020, and another 1.33 billion will be added by the end of this year, with a forecast of 25.4 billion by 2030.² PoE++ is an exciting power solution for a large portion of these billions of devices. PoE++ can power small-scale devices more cheaply. For example, point of sale (POS) devices are becoming more sophisticated and need more bandwidth and higher power. In many businesses, iPads and other such devices are taking over POS duties, and the power usage is much greater than in the past. PoE++ can meet these demands by connecting multiple POS devices to a single PoE++ switch. And, of course, it also can supply enough juice for extremely power-hungry devices such as laptops and flat screens.

Security cameras are among the key devices that pushed PoE into the spotlight several years ago. The fact that PoE could provide power and communication for a camera over a single cable was genuinely revolutionary.

Now, with the higher power provided by PoE++, not just cameras can be powered but entire security systems: cameras, security controllers, ID scanners, and even door lock motors. It can do this by routing through a master control node at any point of entry, such as a smart doorbell.

The benefits of PoE are many; it is flexible, safe, reliable, scalable, and it is quick to install and saves you money.

2 Statista: Number of Internet of Things (IoT) Connected Devices Worldwide from 2019 to 2020

5 Things You Need to Know About PoE Switches

7 Myths About Power over Ethernet (PoE)

What is Industrial Ethernet?