HomeFeatured Posts How Robert Metcalfe Came to Own All Your Ethernets 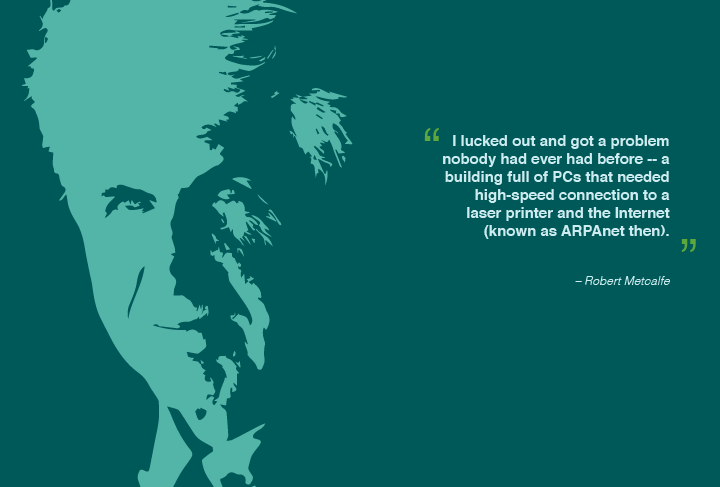 Inventors working in the hardware sector of technology oftentimes fail to receive recognition from mainstream consumers, but it’s safe to say that Robert Metcalfe has become household name in the computer networking industry. Robert Metcalfe is a Swiss army knife for technology-not only did he invent Ethernet, he’s also an engineer, a pundit, a marketer, a venture capitalist, and as his Reddit AMA (short for ask me anything) summary reads, a jack of all tech trades. He’s also an extroverted goofball proclaiming “All your Ethernets belong to me. I’m Bob Metcalfe, Ethernet inventor. AMA!” on Reddit’s AMA thread.

It is exactly this personality trait that has led some to believe that he has stolen the spotlight from introverted technician David Boggs, co-inventor of the Ethernet. But skeptics will find that David Boggs readily gives Metcalfe credit for the invention.

Though known for his expertise as an engineer, his marketing intuition has led him to position Ethernet as the default plumbing pipes of the Internet. His unique mixture of technical and marketing clout led him to establish his own company, 3 Comm,  which he sold to Hewlett Packard for 2.7 billion dollars in 2009.

The Zen of ARPAnet and ALOHAnet

In 1969, Robert Metcalfe earned two B.S. degrees from MIT, one in Electrical Engineering and an additional one in Industrial Management. After earning a M.S. degree from Harvard, he decided to pursue his P.H.D. and became infatuated with the Advanced Research Project Agency Network (ARPAnet), “one of the world’s first operational packet switching networks [and] the first network to implement TCP/IP”, while studying for his dissertation. He worked at MIT’s Project MAC where he was able to continue researching and experimenting with the ARPA network.

Unfortunately, Harvard found that his dissertation lacked theoretical muster and failed him. Xerox’s Palo Alto Research Center snagged him nonetheless and he was allowed to continue researching his dissertation. While searching for his “theoretical muster”, he came across an article that explained how the AlOHA network from the University of Hawaii used randomized retransmission to resend packets that didn’t make it to their destination. He was able to complete his dissertation by incorporating a new “theoretical” chapter in his dissertation about AlOHAnet, and coincidentally, acquired the knowledge that would allow him to invent later invent the Ethernet.

A Stroke of Preparation and Opportunity

During his time at Xerox’s Palo Alto Research Center, he was given the duty to connect a small network of personal computers to a laser printer. Using the knowledge he had acquired from his dissertation, he wrote a memo on May 22, 1973 that laid the groundwork for how Ethernet would function.

Metcalfe considers his invention a lucky one and takes into account how when asked  “that was the first time in the history of the world that there would be one computer on every desk. That had never happened before. So, no one had ever had to solve that problem before”.

And that ladies and gentleman, is the story of how Robert Metcalfe invented the Ethernet and claims ownership to “all your Ethernets”.

Do Not Reinvent the Wheel

On a short interview with oninnovation.com, the inventor explains that he doesn’t really perceive his invention as a stroke of genius, but rather perceives himself as utilizing the information propogated by the giants he was surrounded by at the time.

As a venture capitalists, he advises young entrepreneurs to not reinvent the wheel and to research what their predecessors have accomplished instead.

Do you think Robert Metcalfe, should have eaten his words after mis-predicting the utility of Internet in 1996? Find out which other tech experts made embarrassing predictions about the internet.