This past August, Cisco let of go of 6000 employees, an unfortunate trend that has added to its list of 20,000 workers that have been laid off over the past five years, according to Bloomberg.com. Though Cisco remains the top juggernaut in the selling and manufacturing of networking equipment, international competition like Huawei is giving the respected company a run for its money.

Huawei Technologies Co., founded in 1987, has become a formidable opponent in the Telco industry and has made a recent splash in headlines announcing that it will invest “$4 billion in conducting new research and development in the area through 2017”.

The timing of Huawei’s $4 billion dollar bet on wireline broadband technology is a peculiar one, noting its recent efforts to take over the mobile industry. But according to an in-depth market analysis report by Research and Markets, “analysts forecast the Global Industrial Wireline Networking markets to grow at a CAGR of 25.02 percent” between 20013 and 2018. The “Global Industrial Wireline Networking Market” attributes the growth in demand to expanding networks that seek to “reduce the cost of network management” with low-maintenance Ethernet networks.

The report goes one step further and asserts that “The convergence of wireline and wireless access networks is one of the major trends emerging in the market. The rapid adoption of fiber optics by broadband service providers has increased the demand for advanced network equipment that is capable of handling data from both wireless and wireline networks.” Thus, Huawei’s investment in R&D gives the company an opportunity to define its own rules and protocols and take greater control of its wireline infrastructure, and at the same time, optimize the wireline communication with its wireless networks, a recent area of focus for the company after venturing into the mobile industry. 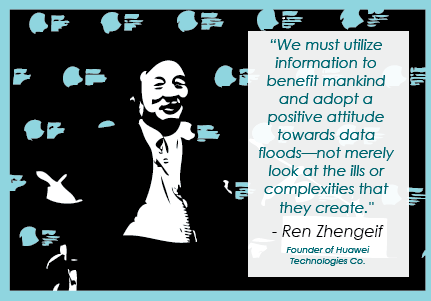 In the span of just five short years, the company has gained international traction and has received recognition from http://www.pcmag.com/article2/0,2817,2459352,00.asp PCMag for example, for its budget-friendly alternatives to higher-end cell phones such as Samsung Galaxy’s Note 3 or Sony’s Experia Z Ultra.  Online sources report that “It has come from nowhere to become the third-largest maker of smart phones in the world behind Apple and Samsung.”

But Huwei faces some obstacles that can prevent it from toppling Cisco in the American market. The United State’s Central Intelligence accused Huwei of foreign espionage and was even banned from Australia’s planned expansion of its National Broadband Network (NBN). But the company has only used the setback to revamp its efforts to penetrate the Latin American market, a move which has only stymied Cisco’s international expansion efforts.

Do you think a $4 billion investment is a smart maneuver for Huawei? Start a discussion below!