HomeEvents What Happens if the Dockworkers Strike? 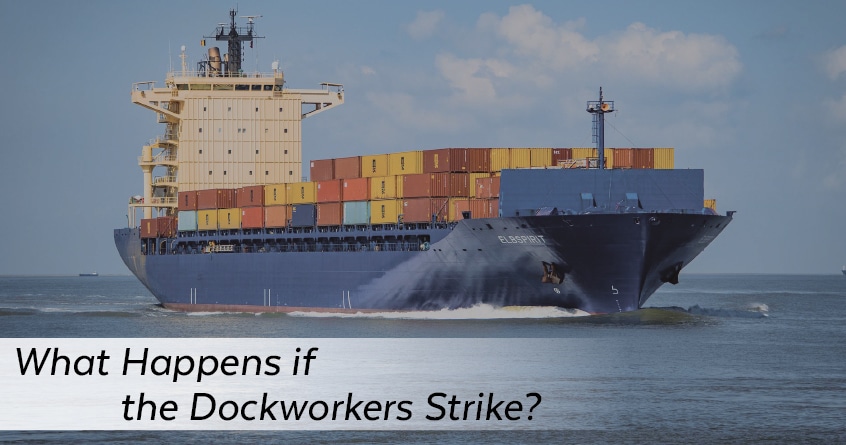 With chain supply stretched to its limits, a new storm looming may add to the current troubles: a potential confrontation between union dockworkers and their employers.

The International Longshore and Warehouse Union (ILWU), representing 22,400 dockworkers located on the West Coast, and The Pacific Maritime Association (PMA) will soon begin negotiations to replace the current contract, which expires on June 30. Per the American Shipper:

“The trade association warned that a delay in contract negotiations would harm companies and consumers that rely on the West Coast ports and force shippers to consider other gateways, especially with the contract deadline falling before the peak shipping season begins for holiday merchandise.”

Approximately every six years, the companies that operate ports from the state of Washington to Southern California enter into labor negotiations with their dockworkers. The last labor talks (held in 2014 and 2015) brought about acute labor disruptions and shipping delays. In addition, the discussions will be held amid a pandemic that has caused record container ship congestion off the Los Angeles and Long Beach ports this year.

“Automation and compensation are considered the main sticking points. The ILWU has a reputation for hard bargaining and enters the talks in a strong position. The union is expected to leverage the congestion to pressure container lines and their terminal partners while insisting its highly compensated members are due a cut of carriers’ record profits, which Drewry now estimates at $190 billion in 2021.”

Needless to say, retailers, already plagued with harmful shipping delays, are concerned about the upcoming contract negotiations. For example, Matthew Shay, president of the National Retail Federation (NRF), wrote in a letter addressed to both the ILWA and the PMA:

“Both parties should attempt to reach a contract well before expiration for the benefit of the national economy and to provide the needed certainty to all the stakeholders in the supply chain that rely on the U.S. West Coast ports. We would further ask that you issue a statement committing to the commencement of meaningful negotiations now and to commit to continue negotiating and working without interruption, even if negotiations extend beyond the June 30 contract expiration.”

The U.S. West Coast ports are the key link to goods from Asia and are essential to our country’s economic stability and growth. They are critical to the industrial, retail, and agricultural sectors across the country. In addition, they are the lifeblood of the economies of the states of Washington, Oregon, and California.

Following is a list of West Coast ports (from north to south):

These ports process 13.5 percent of the total West Coast tonnage.

These ports process 12.9 percent of the total West Coast tonnage.

These ports process 65.5 percent of the total West Coast tonnage.

Port Congestion May Be the New Norm

The ports of Los Angeles and Long Beach are the two busiest ports in the nation. While their port congestion has eased a bit in the first quarter of 2022, there are really no signs that things will return to what we used to consider as normal. According to the New York Times:

“For those who keep tabs on the global supply chain, the very concept of a return to normalcy has given way to a begrudging acceptance that a new normal may be unfolding.

Cheap and reliable shipping may no longer be taken as a given, forcing manufacturers to move production closer to customers. After decades of reliance on lean warehouses and online systems that monitor inventory and summon goods as needed — a boon to shareholders — manufacturers may revert to a more prudent focus on extra capacity.”

Citing the current shipping challenges, the PMA requested that the ILWU agree to postpone contract negotiations for another year. However, the union workers have made it quite clear they are in no mood to do this—so labor talks will take place as scheduled.

These negotiations transpire under conditions where workers are looking at mandatory 24/7 work schedules and where wages are being gutted by inflation. In addition, dockworkers are exasperated by the skyrocketing profits major shipping companies have garnered because of the pandemic. Because of these tensions, a dockworkers’ strike is not out of the question.

The bottom line is that the PMA and the ILWU have a long history of tension. This past year of gut-wrenching late shipments, stockouts, and soaring transportation costs have not helped the situation. To add to the pressure, West Coast ports are among the least efficient in the world. The World Bank’s port productivity index ranks Seattle at 206, Los Angeles at 328, Oakland at 312, and Long Beach at 333 out of 351 ports.¹

The two main points of contention are compensation and automation. Automated stacking machines, yard tractors, truck gates, and ship cranes speed up container handling; however, the ILWU is increasingly opposed to this kind of technology because of a policy to preserve jobs for its members.

Some businesses are already developing strategies to avoid getting their cargo stuck in a West Coast port this summer. These tactics include:

Another strategy is just to hunker down and wait for the contract negotiations to conclude. This plan of inaction takes into account that rerouting cargo to alternate ports is expensive, finding warehouse space is difficult, and the dockworker’s contract may be resolved sooner than expected. In fact, Lars Jensen, CEO of Vespucci Maritime, expects an on-time agreement because “the carriers have learned over the last 18 months it doesn’t matter if you charge a customer $50 or $100 more because they’re paying $5,000 to $10,000 more [on shipping]. So they can certainly live with a deal that becomes a lot more expensive.” In addition, some industry experts predict the new dockworker’s contract will include significantly higher wages and more openness toward automation—as long as it does not eliminate jobs.

“Between now and then, there will be dramatic statements by both parties about a stalemate and the potential for gridlock, but that will be purely tactical posturing and not the reality of their actual positions.”

Versa Technology, Inc. is a distributor of last-mile networking solutions to IT professionals around the world. For the past 25 years, our goal has been to provide the best products and the best customer service available. We want to help your business succeed. Contact us today.