HomeNetworking Li-Fi: Internet at the Speed of Light 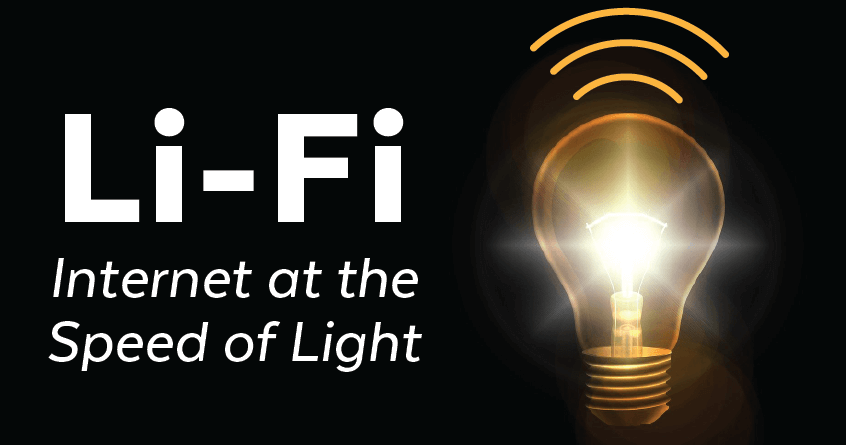 Li-Fi: Internet at the Speed of Light

The demand for mobile communication is snowballing at a remarkable rate. According to the Cisco Visual Networking Index: Global Mobile Data Traffic Forecast Update, 2017-2022,1 mobile data traffic is forecasted to increase to 77 exabytes per month by 2022. This figure is seven times greater than 2017 statistics.

This rapid growth has led to “Spectrum Crunch”—concern about a potential lack of wireless frequency spectrum to support the demands of an ever-increasing number of devices. New technologies are being developed to overcome these obstacles because of the fear of spectrum crunch and other Wi-Fi limitations (e.g., security, range, reliability, and speed). One of these, first launched in 2011, is commonly known as “Li-Fi.”

According to TechTarget, light-fidelity (Li-Fi):

Li-Fi is designed to use LED light bulbs similar to those currently in use in many energy-conscious homes and offices. However, LiFi bulbs are outfitted with a chip that modulates the light imperceptibly for optical data transmission. LiFi data is transmitted by the LED bulbs and received by photoreceptors. 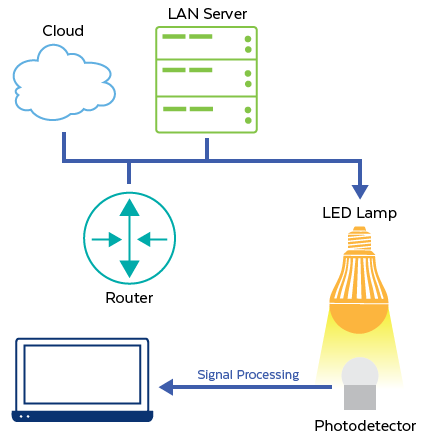 How does Li-Fi work?

Li-Fi comprises a host of light-emitting diode (LED) light bulbs that form a wireless network. This technology causes LEDs to emit invisible pulses of light that enable data to travel to and from receivers. Receivers collect and interpret the transmitted data in a similar way to decoding Morse Code but at a far faster pace. Li-Fi has transmission speeds of over 100Gbps (which is 14 times faster than WiGig).

What are the benefits?

Following is a list of Li-Fi benefits to consider.

At this time, the visible light spectrum (VLS) is under-utilized for wireless communication. It offers far greater bandwidth than is available through a radio frequency spectrum. VLS offers:

Lab tests show that Li-Fi can reach speeds that are 100 times faster than current Wi-Fi systems can. For example, Li-Fi can download 18 movies at 1.5 gigabytes (GB) per second.

This technology does not interfere with radio signals; therefore, this technology can be used in environments where interference is an issue (e.g., hospital, airplanes, chemical plants) and even in areas where radio frequency is not possible (e.g., underwater, under-ground mines).

VLS waves are unable to pass through opaque objects, such as walls. Because of this, a Li-Fi connection can not be leaked to the public or hacked into from an adjacent room. It is also possible to set up high-security areas with their own Li-Fi networks to isolate them from the rest of the building where more vulnerable IoT devices are connected.

Because LED bulbs are inherently efficient on their own, Light fidelity has the potential to be a more energy-efficient and cheaper connectivity option. The use of Li-Fi in homes and offices could eliminate the need for several electrical devices, such as routers, modems, signal repeaters, wave amplifiers, and antennas. The fact that many environments already have LED lighting in place makes switching to Li-Fi cost-effective. Not only that, but Scotland’s light communication company — pureLiFi — is developing solar cells as photodetectors that will enable wireless battery charging and wireless internet at the same time.

Li-Fi can be used in conjunction with Wi-Fi, which gives users the option to employ the best network technology for any given device or circumstance. Also, with Li-Fi, every source of light will be able to connect a user to the internet. In the future, this technology will be immediately at hand to the public. Building lights, street lights, transportation lighting, will all be able to communicate wirelessly so the internet can be accessed wherever a user may be.

What are the disadvantages?

Li-Fi has all the exciting advantages listed above, but it is not a perfect solution. Here are a few of the disadvantages inherent in Li-Fi technology.

The fact that light can not penetrate walls is a big plus for security; however, it also means that Li-Fi has a minimal range. The Wi-Fi range can reach 32 meters (m) in open spaces, while Li-Fi’s maximum span is only ten m. Thus, Li-Fi can only be effectively used in closed areas where lights need to be strategically installed in rooms and hallways to expand the range of the network.

Li-Fi is a new technology. Most devices in use today are geared for Wi-Fi. It is unlikely that the market will see Li-Fi enabled personal devices in the next several years.

3) The Problem of Slow Internet Speeds

While Li-Fi offers a fast data transfer rate, if service providers supply a slow internet speed, Li-Fi’s most significant advantage is pointless. Taking this technology to the mainstream marketplace will involve the collaboration of many industries.

What is the future for Li-Fi?

There is a huge demand for high-speed data communication. And Li-Fi is positioning itself to be a viable solution within the next five to fifteen years. In fact, the industry is forecasted to grow at a compound annual growth rate (CAGR) of 74.6 percent to reach $80 million by 2023.

The world’s first Li-Fi Forum was held in November 2017. The forum comprised industry leaders such as Deutsche Telekom, Orange, VLNComm, Nokia, pureLiFi, and the University of Edinburgh and ended with a joint commitment to drive broad commercial awareness of this exciting technology.

Also, the Institute of Electrical and Electronic Engineers’ (IEEE) 802.11 Working Group has plans to release a Li-Fi standard by 2021.

To learn more about LED lighting and cybersecurity, check out these Versa Technology articles.

One comment on “Li-Fi: Internet at the Speed of Light”