The report is not surprising. The internet has disrupted traditional television viewing habits.

Television consumers now have the convenience of consuming OTT (Over the Top content) via Hulu or Netflix for example, to stream their favorite shows.

The Neilson Company reports that “Watching video on the Internet is no longer a novelty; 119 million unique viewers viewed 7.5 billion video streams in May 2008.” To further validate the trend, Cisco’s Visual Networking Index Forecast “predicts that video will comprise more than 50 percent of Internet traffic and the growth in video traffic will reach a compound annual growth rate (CAGR) of 41 percent between 2007 and 2012”.

Consuming Television via the Internet 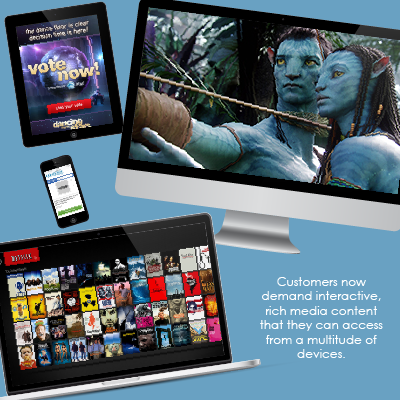 As a result, MSOs (Multi System Operators) and cable operators have arrived at the tipping point of convergence. With Interactive Protocol Television (IPTV), MSO’s deliver television content via the internet, converging video content into a dynamic channel that can be accessed across different platforms.

Media centers are one of the main components driving the demand for high-speed bandwidth. 4k Ultra-High Definition televisions have already started to hit the market. As 4k content becomes more available to stream, media-centers will become more bandwidth-hungry.

The Demand for Faster Upstream Rates

Internet users are not only watching television. They are also creating and uploading their own content at a greater rate. Alcatel asserts that “social media, video chatting and cloud services are driving upstream traffic growth”.

Though Alcatel concludes that symmetrical speed are not quite yet necessary, MSOs are seeking ways to increase upstream data rates with DOCSIS 3.0 and DOCSIS 3.1.

These newer standards allow cable operators to deliver more bandwidth at a low-cost per bit.

Click here, to learn more about Docsis 3.1 and how Telecoms are future-proofing their networks.