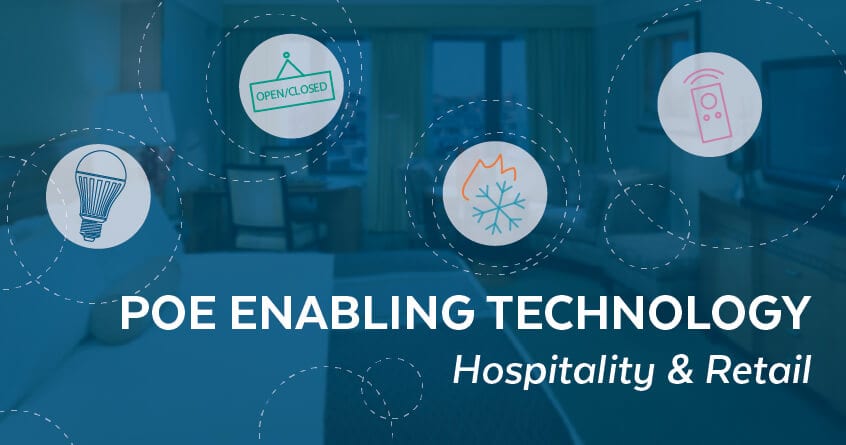 Power over Ethernet is being used by both hotels and retailers across the globe to provide the best possible experience to their guests and customers.

Several studies have shown that outfitting a hotel with advanced technology – such as mobile apps to control temperature and lighting, for example – results in a better overall stay.

PoE is a great way to cut costs, boost efficiency, and maximize ROI.

Picture Power over Ethernet (PoE) as the technology used by telephone companies. Just like telephone lines carry voice and power through the same cable, PoE technology carries networking data and power over the same Ethernet cable.

“Power over Ethernet (PoE) allows for installation of remote or outside equipment without having to connect to AC power. This allows power to be delivered to more areas without the need to install additional electrical infrastructure or to have power outlets at every endpoint. Equipment can be installed without the need for an electrician and because ethernet cable costs less and is often already installed in buildings, PoE-based systems are far more cost-effective and efficient.”

Needless to say, PoE technology creates a whole host of new networking possibilities in a plethora of different industries, including both hospitality and retail.

PoE is based on a universal standard, the most recent of which is the 100W, IEEE 802.3bt standard. There have been several PoE standards created since PoE’s inception – each successive generation allowed for more power to be carried over a single PoE cable

When guests check into a hotel, they expect a luxurious stay. Needless to say, having a technologically up-to-date building is a big part of their experience.

Nobody has to go down to the lobby to use a public computer just to check their email. In today’s day and age, we’ve grown accustomed to having – hopefully fast – WiFi access everywhere we go, and hotels are no exception.

Moreover, hotel staff is now more reliant than ever on their hotel’s network. It’s never been more important to have a fast, secure, and stable network in the hospitality industry.

Whether they’re checking someone in, checking someone out, or looking at their IP security cameras, just about every day-to-day task depends on their network. Nowadays, using one of the best cable modems isn’t going to cut it.  A fast network improves service times, resulting in happier guests.

Here are a few ways PoE is revolutionizing the hospitality industry:

Smart hotels that utilize IoT (Internet of Things) technology can use sensors to alert hotel staff when guests have left their rooms. Once they have left, lights can be turned off and temperatures can be turned down automatically, thus reducing energy expenditure and cutting costs. The same can be said about other rooms in the hotel like the gym, work center, conference room, etc.

PoE and IoT technology have combined, giving guests the ability to control lighting, HVAC, locks, window shades, and entertainment, all from their smartphone. Furthermore, hotel staff can use the same technology to control lights, temperature, and locks remotely after a guest checks out of the hotel.

Technology plays a big part in all of our lives, every day. We’ve grown accustomed to it, and now we expect it when we travel. According to the J.D. Power 2017 North America Hotel Guest Satisfaction Index Study, guests are more satisfied when hotels use mobile apps and IoT technology.

Luxurious hotels across the globe are implementing IoT technology in their guest rooms, enhancing their guests’ experiences and improving their business’ efficiency.

When hotels add more IoT devices to their rooms, they must also enhance their network to allow all of the devices to communicate efficiently.

Hilton CEO Christopher Nasetta, for instance, described Hilton’s “Connected Room” at the Skift Global Forum in September.
The room knows you, and you know the room. Picture walking into your guest room, and being greeted by the television: “Hey John, how are you?”.

Everything you need to control the room will be in the palm of your hand. Through your mobile device, you can control the room’s lighting, HVAC (heating, ventilation, and air conditioning), and entertainment streaming content as well. 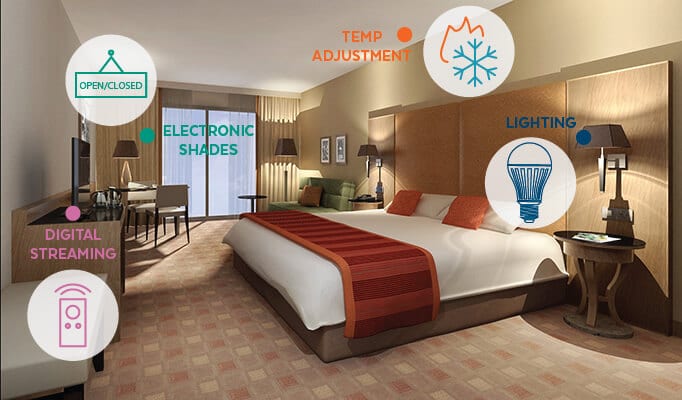 As the Internet of Things (IoT) makes its way into our everyday lives, people are starting to expect the same technological luxuries in their hotel rooms as well.

Voice controlled technologies like Amazon Alexa and Siri are already well-developed – that’s not the issue for hotels.
Rather, it’s expensive and difficult getting the Internet of Things properly connected to existing hotel’s networks. It’s expensive to retrofit everything in a hotel.

Other hotel groups aside from Hilton are experimenting with new networking technology as well.

Mandarin Oriental Hotel Group, for example, is an award-winning company that owns and operates prestigious hotels all over the world.
In fact, they run 45 hotels with over 11,000 rooms in more than 25 different countries.

Mandarin Oriental, Boston recently decided to update their hotel’s infrastructure. They installed Universal Power Over Ethernet (UPOE) devices in their rooms to accommodate even the most tech-minded guests.

Network stability is critical in any setting, especially in the hospitality industry. If the network goes down, hotel staff won’t be able to serve their guests, resulting in a dissatisfactory stay.

Mandarin Oriental, Boston needed new to increase power across the property. They also needed color-displayed phones and an access point to remain operable in the event of a power outage.

This way, they could maintain phone operability and provide internet access, even without power. After all, a power outage is a fantastic way to lose loyal customers. Due to the hotel’s limited IT personnel, they needed a solution that was easy to install and configure.
Their solution?

They chose to install switches with UPOE capabilities. UPOE is the only PoE option on the market capable of in-room switching that can provide up to 60 watts of power to each port.
The result?

A few weeks after Mandarin Oriental, Boston upgraded its infrastructure with UPOE technology, the city suffered a power outage.
Luckily, the hotel was able to maintain phone and internet access for its guests despite the loss of power. If it weren’t for UPOE technology, they would’ve lost their ability to keep their network online and, as a consequence, they would’ve lost guests as well.

PoE technology can prove useful in more than just one scenario.
In another instance, West Baden Springs Hotel used PoE technology to create a magnificent lighting display in their hotel, staying true to the building’s original design:

Hotels that use PoE technology have happier guests, end of story.

In addition to the hospitality industry, PoE also proves to be quite useful in the retail industry as well.

Nowadays, many retailers need to install wireless access points, IP cameras and RFID readers in their stores and warehouses. The equipment is usually installed in hard-to-reach places – with that being said, it’s easy to see how PoE can come in handy.

By utilizing PoE technology, the installation of these technologies is not only easier but more cost effective as well.

You can even use PoE technology with POS (Point of Sale) systems such as electric cash registers and integrated computer systems that record business transaction data.

You can use PoE to manage all of the devices on your store or warehouse’s network, including IP security cameras, VOIP phones, POS systems, and wireless access points. PoE is cheaper in the long run than other networking solutions and it’s far more efficient as well.
If you want to invest in your business’ future, then you’ll have to first invest in PoE tech.

One comment on “PoE Enabling Tech: Hospitality and Retail”