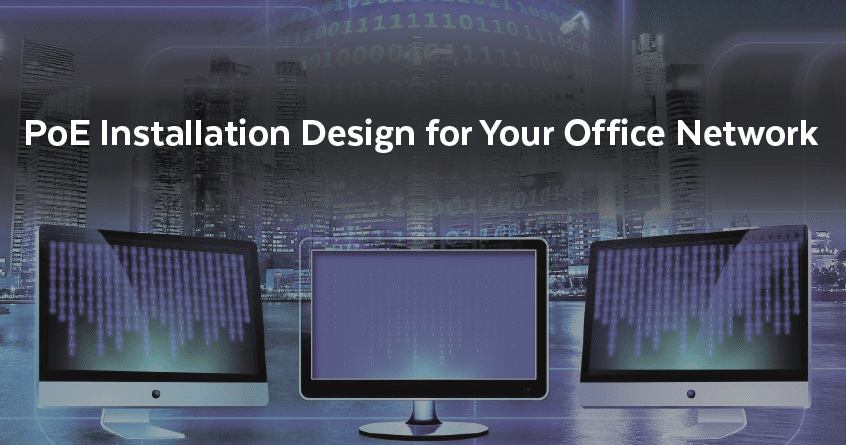 There are many reasons to adopt Power over Ethernet (PoE) and implement a PoE installation for your office network. The most conspicuous of which are fewer cords at workstations and the ability to run these cords without the need for an electrician.

Traditionally, data centers have contained a bunch of electrical devices that each require a power supply cable and at least one connection wire for transmission. Unfortunately, that results in a lot of cables scattered all over the floor.

So, here is where PoE comes in!

PoE technology allows Ethernet cables to transmit both power and data simultaneously over a single line. This not only cuts the amount of wiring needed per device by half it also allows installers to deploy them in locations that lack electrical outlets.

So, how do you install PoE to your network?

There are two methods: adopting a PoE switch or a PoE injector.

The Basics of a PoE Circuit

A PoE circuit has three parts. 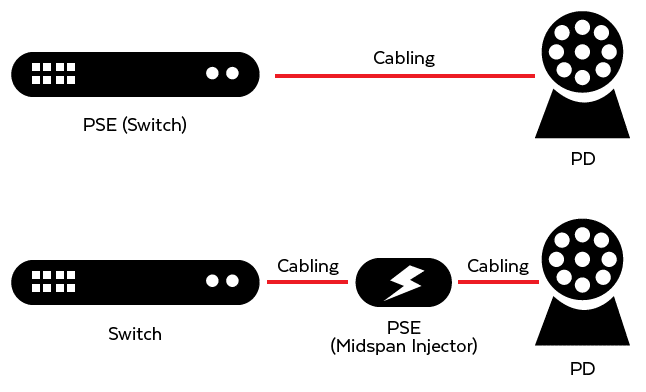 This is how it works: The PD requests power, and the PSE supplies it. When the PD is disconnected, the PSE will remove all power. This system is considerably safer than traditional AC power, which is always present at the outlet. In addition, PoE uses lower voltages. (See the chart below.)

An Overview of PoE Installation

When you want to upgrade your network or replace an old non-PoE switch, using an endspan is a good choice—and it is easy. All you have to do is connect the new PoE switch to the other devices (PDs) in your network (i.e., simple plug-and-play). From then on, the PoE switch will do all the work. For example, it will figure out if the PDs are PoE-supportive devices or not and will control the power automatically.

Should you not want to discard a functioning network switch and only need to add PoE to your system, adopting midspan is your solution.  A PoE injector adds electrical power by receiving a signal from a non-PoE switch, then delivers the data signal and power to the PD. As PoE injectors are less expensive than PoE switches, they can be an economical solution to adding PoE into a LAN if only a few PoE ports are needed.

The installation of a PoE injector is very straightforward. First, “power on” the PoE injector and the non-PoE Ethernet switch; next, connect both devices via a Cat5e, Cat6 or Cat6A  Ethernet cable. The last step is to connect the PDs to the PoE injector, and the system is set to go.

Side note: If your network PDs are not PoE-ready, a PoE splitter can be the solution for adding PoE to your network. A splitter enables a non-PoE-compliant PD to upgrade to PoE. It has two outlet cables: one that supplies power and one that gives data. 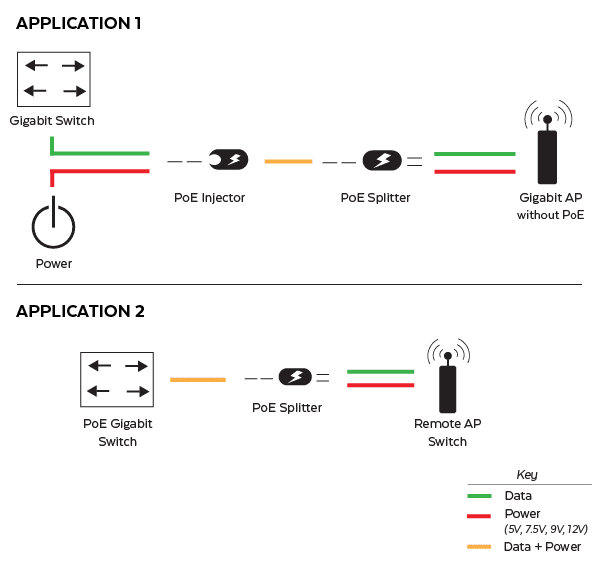 Power over Ethernet is being adopted by both small and large enterprises at a steady rate. According to a recent report (Power over Ethernet Market forecast: 2021-2026), the PoE market was valued at $685.1 million in 2020 and is expected to grow at a CAGR of 12.6 percent during the forecast period of 2021-2026

While there are many reasons to adopt PoE into a workplace (e.g., lower costs and  enhanced efficiency), perhaps the biggest benefit of all is flexibility. Creating a workspace that is safe, comfortable, and meets the needs of the workforce can only lead to increased productivity.

Furthermore, the adoption of PoE will help future proof your business. The Internet of Things (IoT) is continually getting more intricate and complex, providing more and more smart, data-hungry devices each day. It is impractical (and maybe even impossible) to connect everything to AC. Upgrading to PoE allows a single cable to provide both power and data transmission, thus positioning an enterprise to be ready for the coming changes.

Versa Technology is proud of its 25+ years as a purveyor of market industry-leading products that are versatile, user-friendly, and cost-effective. Our equipment is ideal for developed or developing enterprises, large or small. Our goal to provide the best of customer service is unwavering.