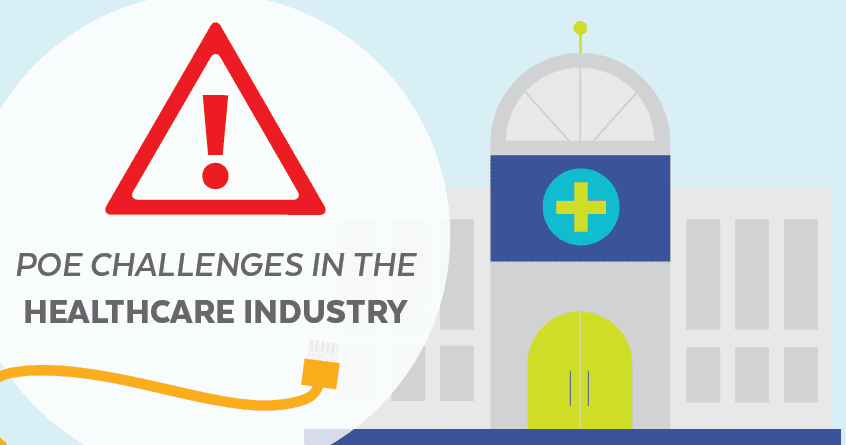 Power over Ethernet (PoE) is a scalable, cost-effective, and efficient networking solution for the 21st century.

There are plenty of useful applications for PoE technology in the healthcare industry, especially when coupled with the Internet of Things (IoT).

Rather than having to install both a power and data cable for every device on the network, Powered Devices (PDs) can be operated with just a single PoE cable.

PoE – despite its many benefits – still suffers from its own limitations as well. In this article, we’re going to talk about some of the problems PoE aims to solve, and some of the PoE challenges in the healthcare industry along the way.

Networking Obstacles in the Healthcare Industry

Our modern society is more connected than ever before – the world is going digital, and the healthcare industry is no exception.

Security breaches can result in the theft of sensitive personal information. The theft of medical records and, worse still, social security numbers or bank information can ruin lives.

Cybersecurity aside, healthcare company mergers can also prove problematic for hospitals and healthcare providers, especially when networks must be integrated together.

Network mergers take time – this is especially true in the healthcare industry, as the networks are dealing with sensitive information and they are relied upon by both doctors and patients alike. An unreliable network could, in some instances, cost lives.

Lastly, old networks in healthcare facilities probably aren’t operating at peak power efficiency, nor is it easy to work with old networks that rely on outdated switches or hubs.

Luckily, PoE solves many of the problems listed above. Power over Ethernet is a powerful tool – it is scalable, flexible, efficient, secure, and best of all, it’s cheaper than traditional networking alternatives.

Moreover, PoE can solve many of the networking issues healthcare facilities are facing today, especially when coupled with the power of IoT.

A managed PoE switch can be used to set up IP security and surveillance cameras, Wireless Access Points (WAPs) and VoIP telephones. Additionally, many managed switches can be used to create secure VLANs, which are more secure than a traditional network.

Since VLANs segment a network, they create several different broadcast domains, each of which permits isolated traffic to each domain. Simultaneously, the network’s bandwidth, availability, and security are increased.

PoE switches and PoE hubs can be used to monitor, reduce and control power usage, offering network administrators a huge opportunity to easily reduce energy consumption and, as a consequence, cut costs as well.

Like many other settings, flexibility is crucial when it comes to networking.

Since PoE-enabled computers, WAPs, IP Cameras, and other PDs don’t need to be connected to a power outlet, they can be installed in any location where they are needed. Furthermore, moving a PoE computer proves equally painless.

IoT is also becoming ever more prevalent in the healthcare industry. For example, IoT based medical devices – such as an

infusion pump, also known as a smart pump – are being used to administer medication without the presence of a doctor or a nurse. Electronic patient monitors are another prime example of IoT applications in healthcare.

All of these IoT devices can be easily powered and operated via PoE.

Evidently, PoE has a whole host of benefits – it is a scalable, reliable, and efficient way to establish a secure network in a healthcare setting.

Unfortunately, even PoE technology has its limitations. Here are some of PoE’s main drawbacks:

Even though PoE is cheaper than traditional networking methods in the long run, healthcare facilities will still have to bear the brunt of the initial installation cost.

An old network relying on non-PoE switches would have to either:

A network that’s already relying on non-PoE switches probably shouldn’t get rid of their existing infrastructure entirely, as it would prove to be too expensive.

Rather, it is cheaper to use PoE hubs, which can take the data from a regular switch, inject it with power, and send a PoE signal down the line to the network’s powered devices.

Keep in mind, however, that despite PoE’s upfront installation costs, it’s still far cheaper than installing a non-PoE network.

Rather than having to run both a power and data cable to every device on the network – not to mention installing power outlets in hard-to-reach places – a PoE network only requires technicians to run a single cable from the PoE switch (or hub) to the device.

PoE suffers from some distance limitations, which is probably one of its biggest downfalls.

Since PoE technology relies on traditional CAT Ethernet cables to deliver power and data, a PoE network is going to be limited by the effective range of traditional cables.

Range varies depending on the access point and its required voltage, in addition to the amount of voltage provided by the Power Sourcing Equipment (PSE). The quality of the cable is also going to have an effect on the maximum effective range.

Luckily, is a solution to this problem:

You can buy PoE extenders and connect several PoE cables to them, significantly increasing their maximum range. Still, this won’t last forever. The farther away a device is from your PSE, the weaker the signal will become.

In large hospitals and other big healthcare facilities, PoE switches and/or hubs may have to be installed in several different locations throughout the building.

Some devices on the network may not be PoE compatible, meaning they require one connection for data and another for power.

In this instance, you won’t be able to run a PoE cable directly to the device. This may seem like it defeats the purpose of using PoE in the first place, and it does – kind of.

Fortunately, there are a few easy solutions.

You could get rid of the device and replace it with a PoE compatible device, but that would be pretty costly and a waste of a perfectly good device. This becomes even more problematic if a lot (or most) of your devices aren’t PoE compatible.

Instead, you can use a PoE splitter (which is the opposite of a PoE hub/PoE injector, by the way) to connect a non-PoE device to a PoE cable.

Basically, a PoE splitter takes the power/data signal from a PoE cable and splits it into two – one cable supplies power, and the other data. This way, you can still connect a non-PoE device to a PoE network without having to run separate power and data cables to the device.

Further still, using a PoE splitter eliminates the need to install power outlets in inconvenient locations, which reduces both installation time and cost.