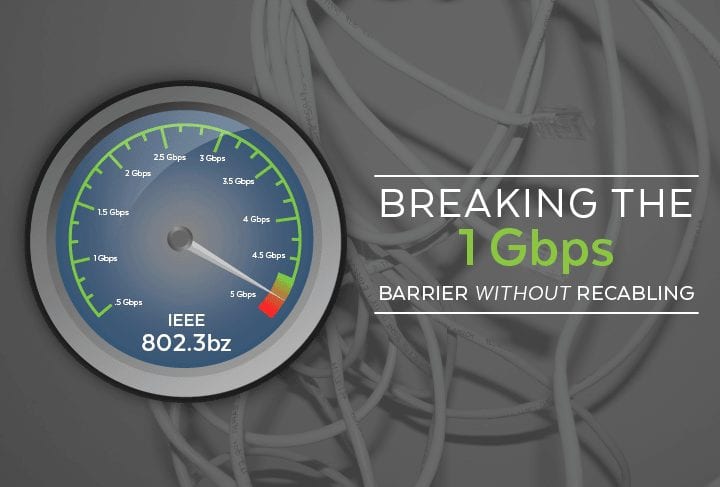 For almost a decade now, IT Teams have relied on the 1000BASE-T Ethernet standard over copper wires.  Using Category 5e and Category 6 cables, network admins are used to achieving data speeds of roughly 1 Gbps for single users.

While these throughput speeds have been adequate for a while, the increasing demand for speed has led to a new Ethernet Standard: IEEE 802.3bz. 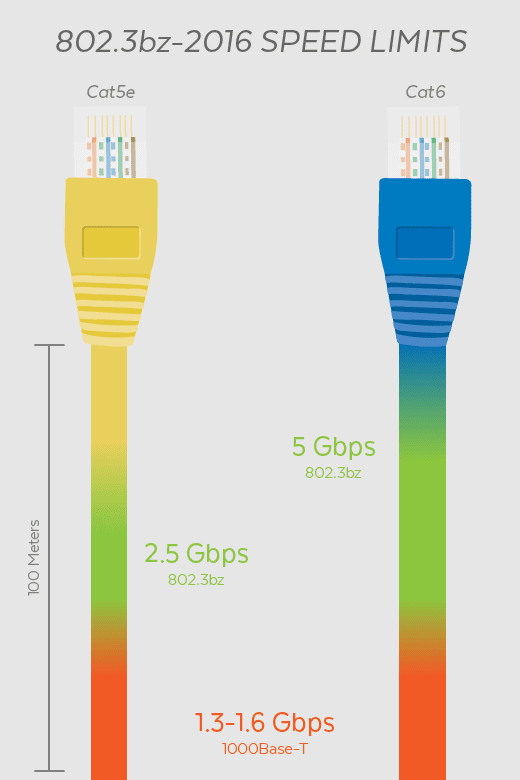 Those speeds can be attained over cable lengths of up to 100 meters (330 feet). They’re also bookended by a switch on one end and either an electronic device or an Ethernet Extender on the other.

This newer and faster technology standard came about in large part thanks to the cost saving BYOD movement and the resulting need for multi-gigabit speeds over Wi-Fi, says NBASE-T Alliance, a 45+ member consortium focused on revitalizing network infrastructures..

“Rapid adoption of IEEE 802.11ac Wave-1 and Wave-2 standards, and the bring-your-own-device (BYOD) policies are shattering the 1 Gbps throughput barrier of 1000BASE-T Ethernet.”

With a growing need for velocities closer to 10-Gbps, companies are looking for sensible methods to expand their networking capabilities without needing to incur the high costs of recabling.

The High Cost of Cable Upgrades

According to NBASE-T Alliance, “The cost of a cable upgrade is estimated to be $300 per cable pull. A campus-wide upgrade could cost hundreds of thousands of dollars. Category 5e (Cat 5e) or Category 6 (Cat 6) copper cables represent close to 100 percent of the installed cable infrastructure in enterprises around the world.”

Budgets aren’t the only challenge associated with recabling either.

Cable upgrades can be extremely time consuming and result in both costly delays and unwanted disruptions to business operations.

Believe it or not, the varied costs associated with replacing Cat 5e and Cat 6 cables with the newer Cat 6a have been so prohibitive that industry leaders banded together in 2014 to find an alternative solution.

The result of that collaboration is the new IEEE standard.

The  802.3bz protocol, which is still in development from an end user perspective, was officially published in September 2016.

The standard not only allows 2.5Gbps over Cat 5e or 5Gbps or Cat 6, but it also implements a number of new Power over Ethernet (PoE) Standards.

All of this collaboration and technical ingenuity will make it available for people to stream higher quality video and do their taxes at the same time.

High Definition Video can consume up to half of that 1 Gbps and burn some serious bandwidth. As 4k video and live streaming become increasingly common, consumer demand for higher network speeds is following suit.

Here are the Internet Connection Speeds that Netflix currently recommends for videos of various quality: 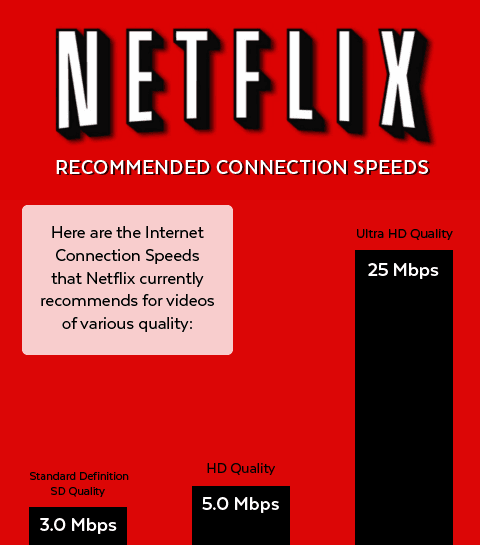 The standing question then, is best quoted by one streaming video outlet: “How much speed do you really need? Like money and sleep, it feels like you can never have enough.”

Amazingly, the physical layer of 2.5G/5GBASE-T is quite similar to the earlier 10GBASE-T standard. However, it consumes less than half of the bandwidth without requiring mega-shielded cable.

This protocol should reach consumers sometime in the next year or so. The best part? You most likely already have the right cabling in place!