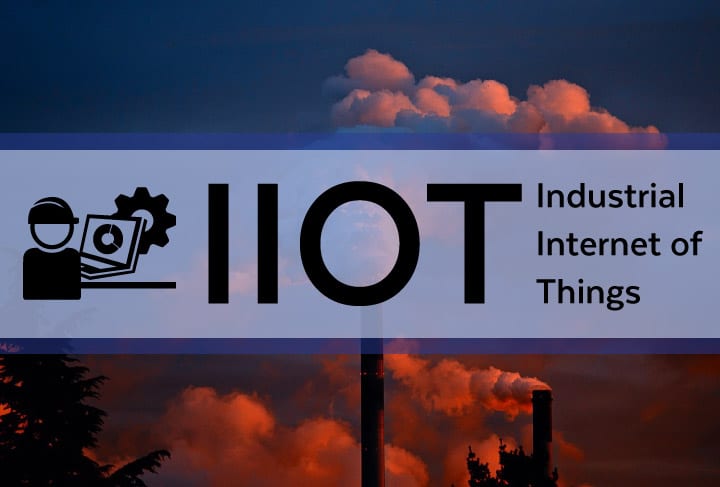 Gartner predicts that 20.8 billion things will be connected to the internet by 2020. The Internet of Things (IoT) describes the new generation of smart devices that connect to the internet and offer users the ability to remotely control and monitor their devices. Consumers typically associate the Internet of Things with sexy consumer products such as wearables and smart home automation devices. But did you know that “most Iot devices are not in your home or phone”? [1] In fact, a sizeable portion of IoT devices are deployed in factories, businesses, and healthcare.

This sector of the IoT industry is known as the Industrial Internet of Things (IIoT) and it includes industries such as manufacturing, healthcare, transportation, oil and gas, and even agriculture.  Also dubbed as the internet of unsexy things by Stephen Bryant, the bulk impact of the Industrial internet of things will stem from inexpensive sensors– the data collecting barnacles that feed off the processes of physical machines. Sensors are becoming increasingly cheaper to the extent that connectivity will become a default feature in even the most basic options.

This hyper-awareness of machine processes will allow business to increase their operational efficiency by reducing downtime and increasing productivity levels. However, industrial businesses will also have access to a surplus of information allowing them to collect insights that may also help them develop new products and services.

Michelin Group is one such example. Their pre-digital business model consisted of offering one sole product: tires. But when the company added sensors to their tires, they were consequently able to offer a new software-based service. Their new software takes input from the sensors in their tires to help train truck fleet drivers to drive more efficiently and reduce fuel consumption. Michelin is an example of a product-based company that was able to spawn a new information-based service.

The impact of the IoT world will occur behind the scenes of the Industrial Internet of Things and will largely remain invisible to consumers. These IIoT devices will operate silently in infrastructures and collect valuable data. This data will be translated by experts or software to generate insights and increase efficiency and revenue. And for the first time in history, industrial industries will have an opportunity to create hybrid business models between their physical products and digital services that can emerge from the new influx of data that they collect. In the same way that the Information Age has pressured professionals to become knowledge workers, IIoT will challenge industrial industries to enter the digital economy and collaborate with unlikely partners.

But a greater capacity for predictive and preventative data can lead to what experts are calling an “outcome economy”. In an outcome economy, consumers will purchase results as opposed to Seth Godin’s conceptualization of the placebo generated by marketing.

The Industrial Internet of Things can be seen as an evolutionary step up from Machine-to-Machine (M2M) technology typically designed for closed-ended, point-to-point connections. The flaw with M2M technology, as explained by Automation World, is that even though remote management is possible, “Rarely… [is] the data integrated with enterprise applications.” M2M applications typically rely on hardware modules embedded in a machine whereas IoT devices depend on low-powered and passive sensors that communicate using standards-based IP networks. IoT devices also offer a more scalable solution by utilizing the cloud. M2M can be seen as the equivalent of running a CD-Rom while IIoT can be compared to connecting to the Internet.

The IIoT will rely heavily on the practicality of Power over Ethernet (PoE). With data and power delivered via a single Ethernet cable, PoE simplifies the deployment of networking equipment in locations without electrical circuitry. Higher-powered 802.3at devices can supply a maximum of 25.5 watts of power and can support a variety of networking and non-networking applications such as PoE lighting. Using PoE as the electrical interface in these types of environments is a practical solution. Machine Design  asserts that “Ethernet has 10 to 100 times higher data throughput rates than with fieldbuses, is a widespread technology, cost-comparable to analog interfaces, based on industry standards, and is flexible and compatible with current automation systems.” The following will describe the type of equipment used in industrial environments.

The IIoT industry will rely on Gigabit and Fast Ethernet Switches with PoE capabilities and different uplink options for to fit the different needs of a variety of networking environments. The IGS-803SM-8PHE24 (Extended Model) is a managed industrial grade Gigabit PoE (Power over Ethernet) switch with 8 Gigabit PoE interfaces and 3 SFP Gigabit/Fast Ethernet ports that help network administrators benefit from the power of PoE and fiber. It’s not uncommon for switches such as these to include STP/RSTP/MSTP/ ITU-T G.8032 Ring and multiple U-Ring features. Devices such as the IGS-803SM-8PHE24 also boast energy-efficiency with advanced PoE management functions. These units are designed to withstand harsh electrical demands and temperatures to ensure reliable operation in industrial networking environments. The IGS-803SM-8PHE24 is a wide operating temperature range model (-40 to 75°C) and is an ideal option for the industrial automation of applications. 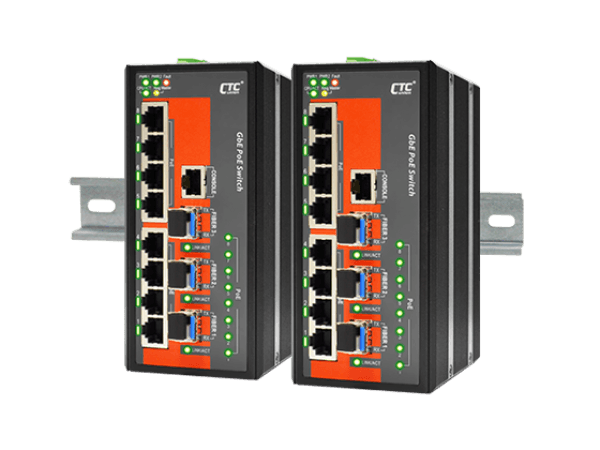 Ethernet can be used as the electrical and data circuitry to a networking environment but at the same time, it comes with a standard 100-meter limitation. Units such as the IVC-2002 allow network administrators to bypass the 100 meter Ethernet limitation.  The IVC-2002 is resistant to electromagnetic interference and withstands surges that could occur in industrial plants or traffic control cabinets. This unit operates efficiently in varying temperatures ranging from -40 to 75 degrees C, allowing for the deployment at any location. 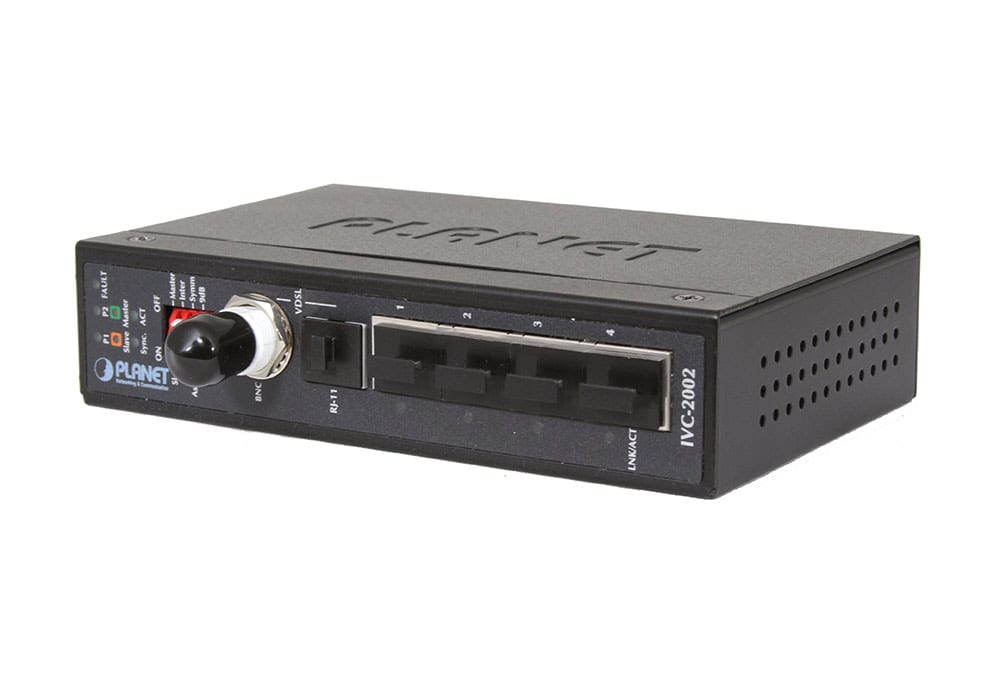 Industrial environments can reliably obtain fast transmission speeds even in copper-based networks. Versa Technology’s VX-VEB160G4 (V2) is one of the fastest Ethernet Extenders available on the market and can achieve transmission speeds of up to 300Mbps (Downstream: 190 Mbps/Upstream: 110 Mbps). These units provide a cost-effective alternative to fiber deployment delivering fast transmission rates using existing copper lines. 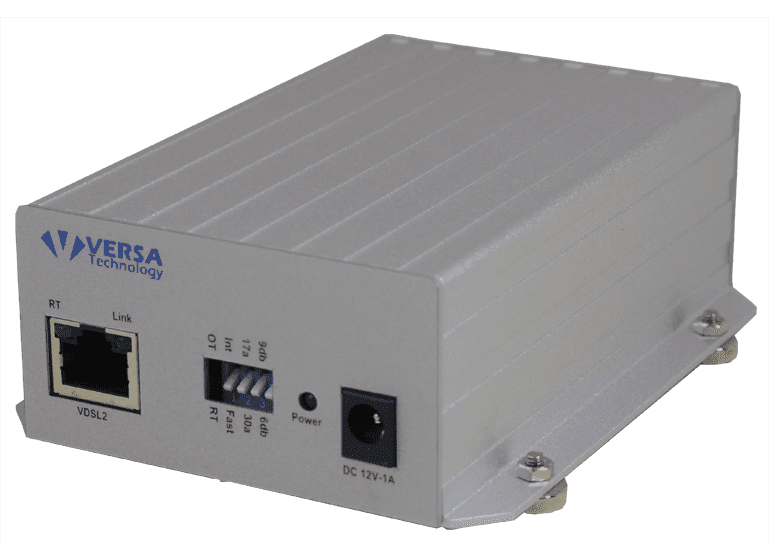 It’s not uncommon for IIoT devices to function in hybrid copper and fiber networks. Media converters such as the IMC-1000 can provide media conversion between an electrical 10/100/1000base-T cable and an optical 1000/1000Base-X Ethernet. These units are housed in DIN rail or wall mountable encasements that can withstand harsh industrial environments, such as industrial networking and intelligent transportation systems (ITS). These units are ideal but not limited to military and utility market applications where environmental conditions exceed commercial product specifications. 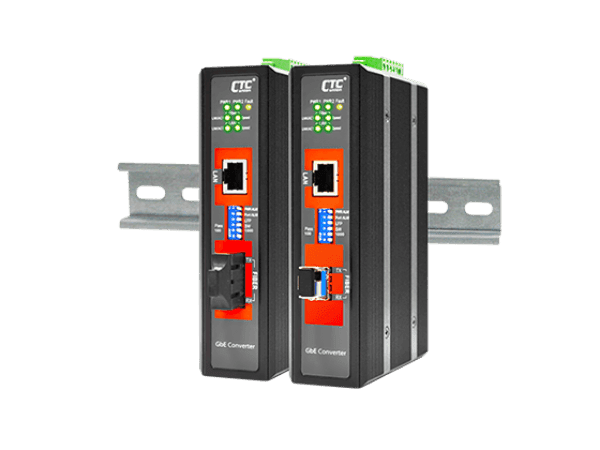