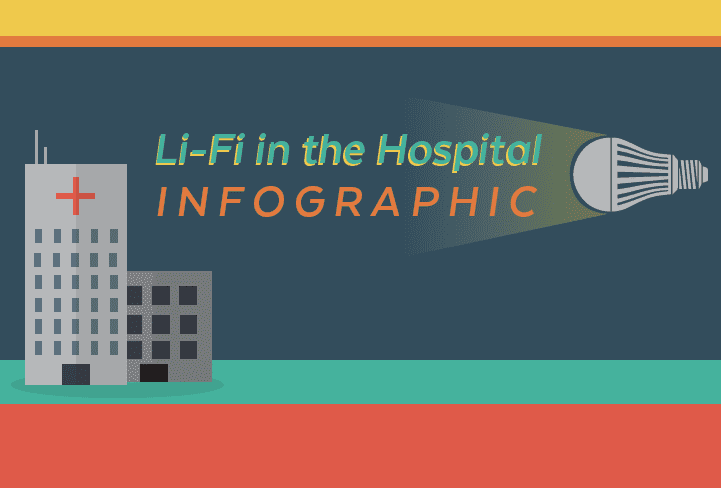 Li-Fi is a relatively new connection method pioneered by Researcher Harald Hass from the University of Edinburgh that can connect users to the internet using LED Lights.

But researchers from Pukyong National University seek to research and adapt this new technology for medical usage. Successful Li-Fi implementation in hospital environments will make it possible to eliminate the need for medical devices to rely on wired connections to achieve internet connectivity.

Li-Fi Use Cases in Medical Environments

Researchers have been able to successfully transmit electroencephalogram (EEG) brain signals via Li-Fi.  IEEE spectrum reports that “power ranged from one half to 100 millivolts, and frequencies between one half and 45 hertz”. RGB sensors were used to amplify these weak signals and to filter distortions.

The research team has also been able to obtain Electrocardiogram (EKG) readings — a medical device that reports the electrical activities of the heart.  Li-Fi could also potentially support Electrooculography (EOG), a technique that measures the distance between the front and back end of the eye.

Li-Fi, short for Light Fidelity, avoids the crowded RF spectrum and can transmit information at a faster rate than wi-fi. Gizmag reports that researchers from the Autonomous Technological Institute of Mexico (ITAM) have successfully been able to “transmit audio, video and internet at rates of up to 10 gigabits per second”.

But Researcher Harald Haas has taken his technology one step further and is experimenting with replacing LED lights with laser diodes to achieve “beyond 100 Gb/s.”

Advancements in Li-Fi technology might just make your next visit to the doctor a wireless affair powered by Li-Fi LED lights. 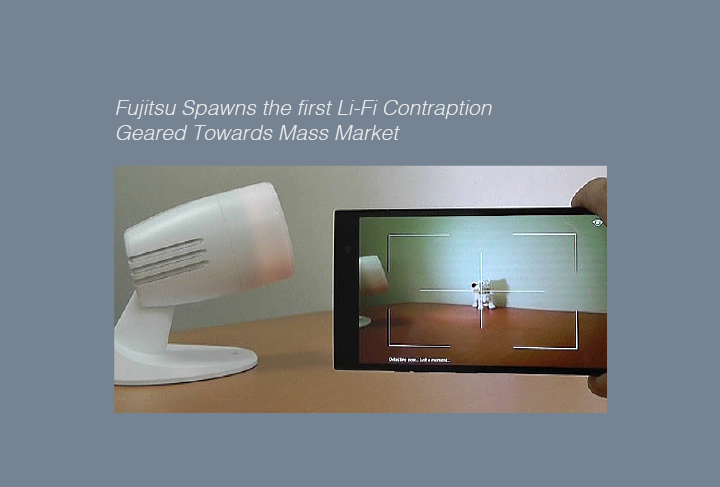 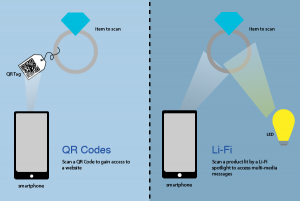 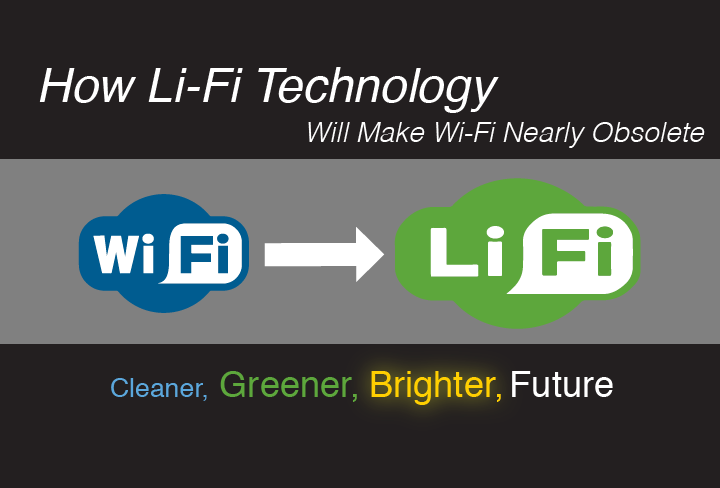 In the near-future, you may find yourself looking for the nearest LED light to connect the internet.

Researcher Harald Haas from the University of Edinburgh has made it possible to transform LED light into an electrical signal that can provide high-speed data streaming.

This means that pedestrians walking down a street illuminated with LED lights could very well be able to surf the internet without interruptions. Public infrastructure like hospitals, police stations, and libraries that utilize LED as their primary light source could easily be able to provide internet users with Li-Fi connections. 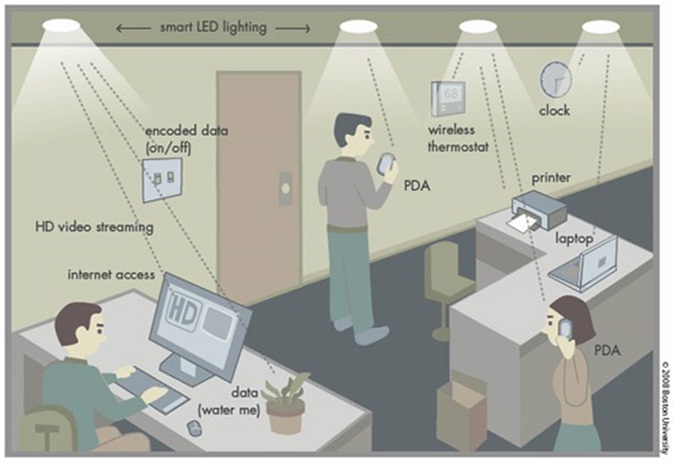 Researcher Harald Haas who works from the Alexander Graham Building states that “All the components, all the mechanisms exist already…You just have to put them together and make them work”. If his optimism proves true, you might be searching for the nearest Li-Fi hotspot to connect to the internet.

During the IEEE Phototonics Conference this past October, members of the consortium were able to “create a system that could both send and receive data at aggregate rates of 100 megabits per second. When transmitting in one direction only, they reached a rate of 155Mb/S. [They have also] created a better LED, which provides a data rate close to 4 gigabits per second operating on just 5 milliwatts of optical output power and using high-­bandwidth photodiodes at the receiver.” 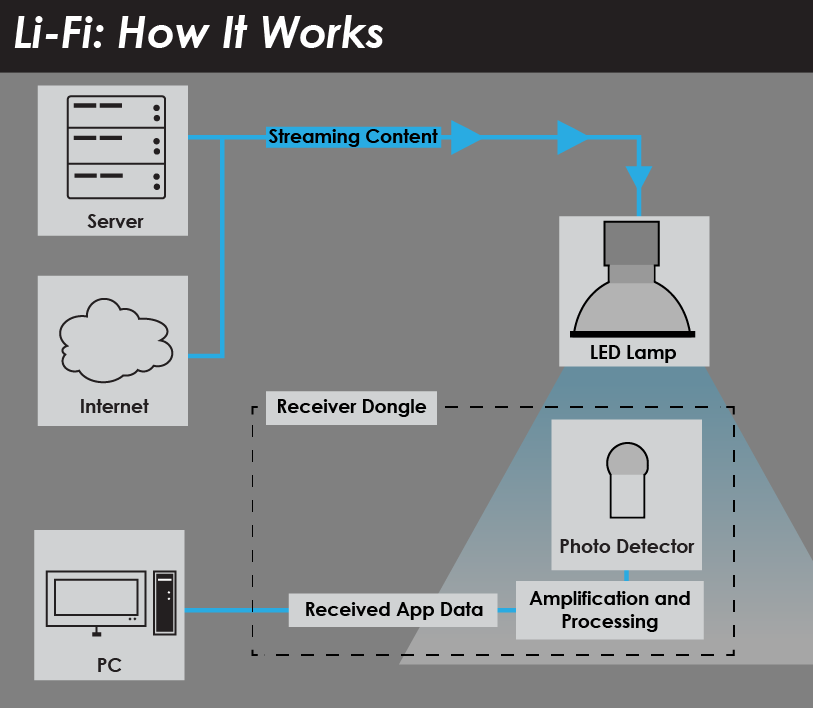 In his 2011 Ted Talk, the researcher highlights that we “have more than five billion [mobile devices]… [and] transmit more than 600 terabytes of data every month”. Since radio waves are scarce and expensive, the researcher suggests migrating to the visible light spectrum for wireless communication. The visible light spectrum is several times wider than the radio wave spectrum and would allow Li-Fi to offer faster connections than Wi-Fi.

These advancements however, do not entail that Li-Fi will replace Wi-Fi technology. The new technology comes with limitations. Physical barriers that block a direct light source can interfere with a connection and wireless communication in the dark is practically impossible. 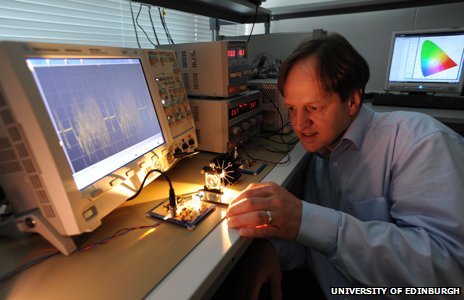 IEEE spectrum reveals that “Haas…expects LEDs to evolve past just being light sources, much the same way the cell phone evolved from a communications device to a mobile computer. “In 25 years, every light bulb in your house will have the processing power of your cell phone today,” he says. Haas envisions that illumination will just be one of the many features that LED will offer.

It seems that the future of the internet will bring a myriad of ways to connect to the internet. Elon Musk announced just last week that his latest endeavor includes launching satellites that will provide “unfettered internet access to the masses”.

Would you utilize an LED internet connection?