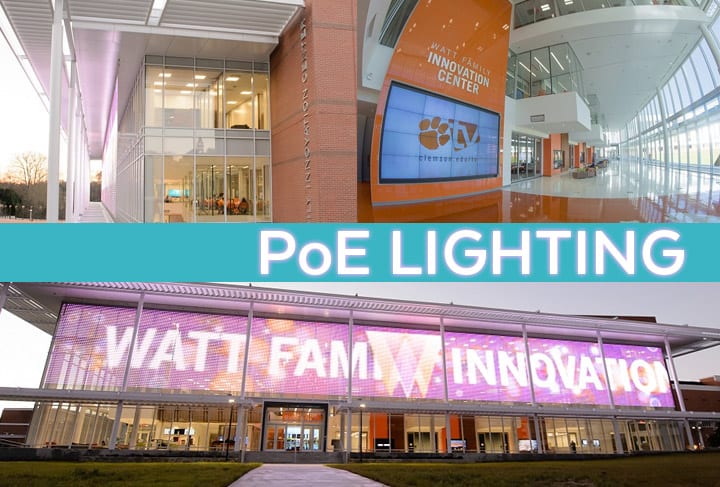 PoE Lighting is a cutting edge technology that provides a branding statement of innovation for the center which was built to encourage student-faculty collaboration. The 70,000 square building boasts PoE-based indoor LED lighting that can be regulated using the web-based Phillips Envision Manager. The control system features convenient remote control using a software console that can be accessed on different computers, smartphones, or tablets.

Another additional feature of the smart lighting system is that the PoE system’s occupancy sensors can automatically power lights on or off. The occupancy sensors also gather data to provide historical and real-time usage trends.

How does PoE lighting work?

Cat-5 cabling is comprised of 4-twisted pairs. As Mike Hornung elucidates in Energy Manager Today, if LED lights require low data speeds, up to 3 pairs can be used to provide power, reserving the remaining pair for data.  Even though the off-switching of voltages in differentiated signals can transmit data, it’s also possible to shift the voltages (from 10V to 0V as opposed to -5V to 5V for example) and be left with a positive voltage that can be extracted from the adjacent end of a wire.

PoE traditionally supports low-powered devices, but 802.3 Ethernet standards are evolving to adopt higher power. For example, the 802.3at standards can supply up to 25.5 Watts of power and it is speculated that the ultra-PoE pre-standard will be able to supply 100 Watts of power.

With the ability to support power and data, PoE removes the cost of hiring expensive electricians making it possible for IT personnel to easily manage the infrastructure. The large-scale installation is a testament to the possible future of Power over Ethernet. The cabling’s flexible and versatile deployment options will help usher in the much-anticipated adoption of the Internet of Things (IoT). With the ability to deliver power and data, PoE can easily provide connectivity to a large portion of the IoT market— particularly because a large portion of the IoT market will be comprised of sensors that have low-power requirements.

Clemson University’s PoE-based LED installation uses the Phillips Envision Manager, a web-based software configuration center, to allow system integrators to control and monitor the LED lights within a centralized control center. Another aspect of the interface is it also integrates other site services such as HVAC (heating, venting, and air conditioning). User-friendly interfaces such as these will curb learning time of new users and will contribute to the mass adoption of IoT components in both the consumer and industrial sector. 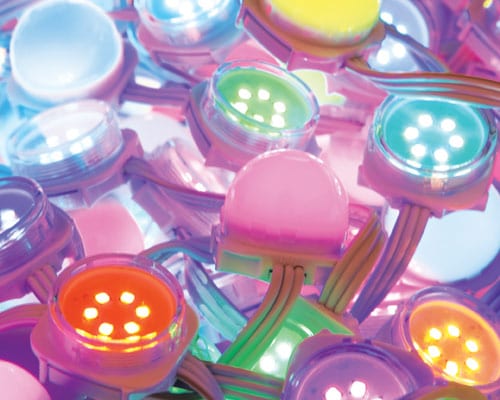 So how energy efficient is the Royal Phillips installation? According to their press release, “this new lighting solution will deliver up to 70 percent in energy savings compared to similar buildings using conventional lighting.” In fact, “Phillips and Cisco have both evidenced a 50% reduction in installation costs for Ethernet-based connected lighting systems compared with conventional AC-powered systems.”

The high-profile installation leads us to questions new devices can adopt PoE and if telecommunications can be solution to energy management.