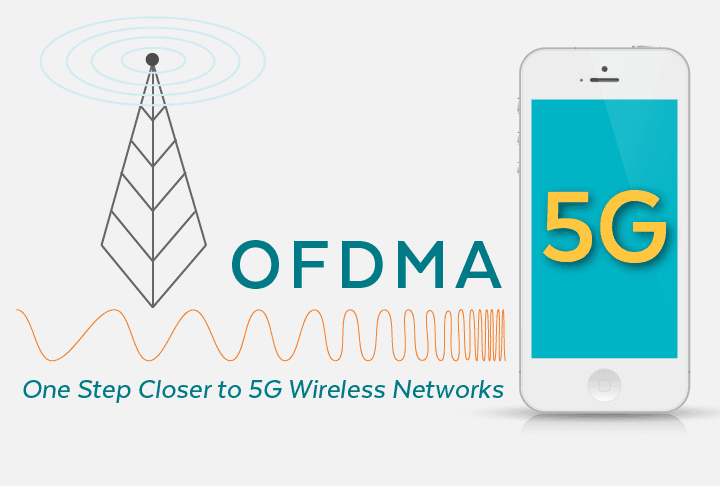 There’s a lot to love about 4G, the least of which is that it’s substantially faster than 3G.

The increased bandwidth allows us to stream quality video and much much more. But with so many people accessing larger quantities of data every minute, we’ve just about maxed out our capacity.

It won’t be long before wireless users will find themselves in need of even larger data consumption capability.

That’s due to the upcoming introduction of mainstream Virtual Reality, Self-Driving Vehicles, and the roughly 20B other devices set to connect over Wi-Fi over the next 5 years.

The long and short of it is: we’re going to need faster data transfer speeds.

Enter 5G. Of course, 5G is still a ways out. And what it will ultimately end up looking like is still relatively unclear. But we do know that it will include:

5G has its own set of challenges to overcome, but experts say it’ll have the ability to process up to 1000x more traffic than 4G can handle.

In the meantime, a new low power, high efficiency Wi-Fi is on the horizon. IEEE 802.11ax.

Thanks to this new high-efficiency Wi-Fi protocol, current frustration factors over jumping on wireless networks just went down a few clicks. This version of Wi-Fi offers some great features that’ll make connecting with your cell phone in particular, a lot easier.

The Physics of Sound Waves

Frequency waves can be measured in length. Obviously, or 5G “millimeter” waves wouldn’t be a new feature. As you probably are already aware, wavelength impacts how fast and far sound or data can travel.

For an example of how powerful this is, look no further than the mighty whale. The blue whale make calls between 10 and 40 Hz and lasting between 10 and 20 seconds. (The lowest frequency sound a human can hear, incidentally, is 20 Hz).

A single 10 Hz wave is an astonishing 17 meters long. In a perfect environment (which includes cooler temperatures), whale frequency waves can travel up to 1400 meters per second. When you do the math, it shows that amazingly a blue whale can hear other blue whales crying from over 26 miles away.

Now imagine you could attach a bunch of sub waves to those powerful 10 Hz whale cries. You could literally push those subwaves that 26 miles along with the whale cries. And, with 17 meters to play with, you’d have a lot of room to do just that.

As in sound waves, this same principle applies for radio waves.

The secret to OFDMA is that it takes advantage of all of that real estate on each and every wave. The key is granularity.

Wi-Fi traditionally operates over frequencies of 6 GHz and below. Carriers have recently had challenges with cramming the increasing numbers of devices onto this somewhat narrow frequency spectrum.

With more devices connecting to networks, service slows and connections can even drop. With OFDMA, multiple users are assigned access to subsets or subcarriers.

The ability to tap into smaller segments of the frequency spectrum with timed functionality will become even more important in 5G, where data will travel on millimeter waves.

You can fit a lot of subcarrier waves in between carrier waves. Employing timed, millimeter-sized waves will allow 5G technologies to take advantage of even more.

With 5G, simultaneous low data rate transmissions will also be able to travel over the same frequency in both directions without delays. Uplink and downlink signals can travel simultaneously without interference.

In FDM, bandwidth available in a communication medium divides into non-overlapping frequency sub-bands. All frequency resources are allocated for a single user. In each timed segment, one user gets the full allocation of the sub-band.

In OFDMA, timed bands are actually divided between multiple users.

The ORTHOGONAL aspect controls the timing of bands so that no signals or data interfere with other signals sharing the same frequency.

Guard bands, normally employed between channels to prevent waves from clashing and cancelling each other out, are no longer necessary. This frees up even more space on each wave.

Greater granularity becomes available and can be attributed to the synchronized timing of the other signals sharing the same frequency band.

Where OFDMA Gets Used in 4G

OFDMA is actually a proprietary name. But much like the term KLEENEX, engineers use the terminology OFDMA in most instances.

We’re not there yet. 5G requires the support of a different type of infrastructure.

Instead of single, far-flung cell towers, providers will need to position smaller units in a mesh-like configuration to support these different millimeter waves. But each month brings exciting advances that lead us ever closer to a workable 5G network.
If you’d like to learn more about what OFDMA can do, stay tuned for more information on 802.11ax as it will be brought to market sooner than 5G. 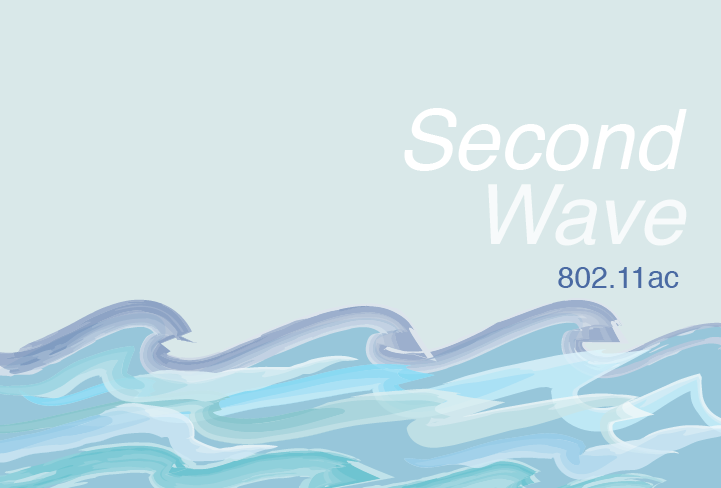 The second phase of 802.11ac equipment, also referred to as Wave 2, is set to hit the shelves early next year and will undoubtedly give networks a performance boost that will force networks to invest in upgrades.

According to Tech Blogger Gina Narcisi, “Gigabit Ethernet edge switches can handle the flows produced by Wave 1 802.11ac, but Wave 2 will require new switches to handle faster traffic.” In addition, the second generation of the 802.11ac will create a market need for 2.5 and 5Gb Ethernet switches.

With a physical link rate of nearly 7Gbps, even 1GB Ethernet will no longer be able to support a network with several connected 802.11ac devices. This will force eager adopters to upgrade to 10Gb Ethernet or wait until the MBASE-T and NBASE-T alliances standardize 2.5 and 5G Ethernet specifications.

Wave 2 802.11ac equipment will prepare networks for the projected 212 billion wireless devices expected to connect to the internet by 2020.

Networks that want to benefit from a smaller performance boost without an additional investment in infrastructure upgrades might want to consider catching the first wave of 802.11ac. 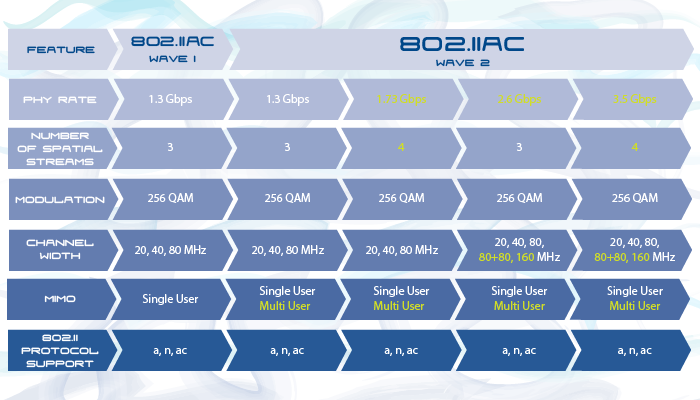 To reach optimal speeds, instead of relying on an omnidirectional broadcasting signal, the second wave of 802.11ac access points will depend heavily on explicit beamforming to be able to support Multi-User MIMO (also known as Multi-Input and Multi-Output). In order to determine which direction to broadcast a signal, explicit beamforming requires both the transceiver and receiver to communicate with each to establish a strong signal path to form the beamform. Beamforming helps direct a transmission signal towards a specific location to strengthen the reception of a signal. 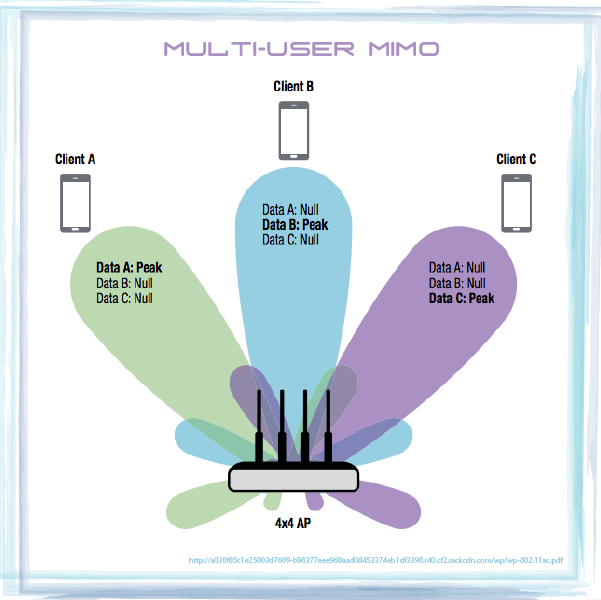 Img courtesy of Ruckus. Click on the link to view whitepaper.

MU-MIMO relies on Spatial-Division Multiple Access (SDMA) “to allow multiple transmitters to send separate signals and multiple receivers to receive separate signals simultaneously in the same band”. This new ability to multitask within the 8 available spatial streams will make it possible to “serve multiple clients at the same time and support an increased number of VoIP calls, video streams, and other Jitter and Latency-sensitive applications.”

Will you be catching the first wave or second wave of 802.11? Leave us a comment below. 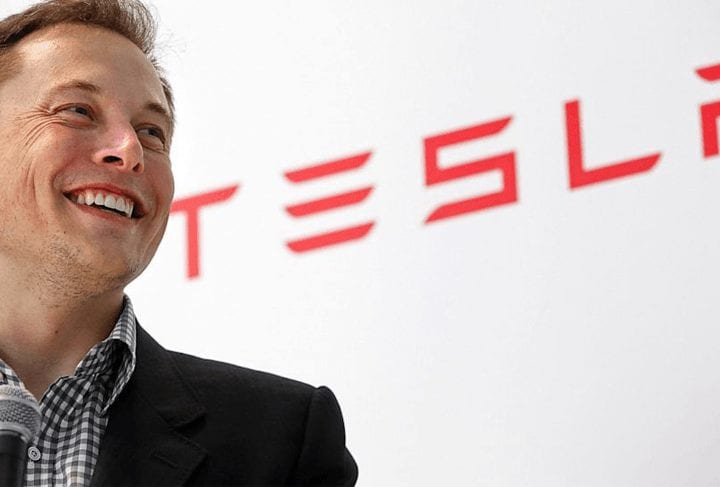 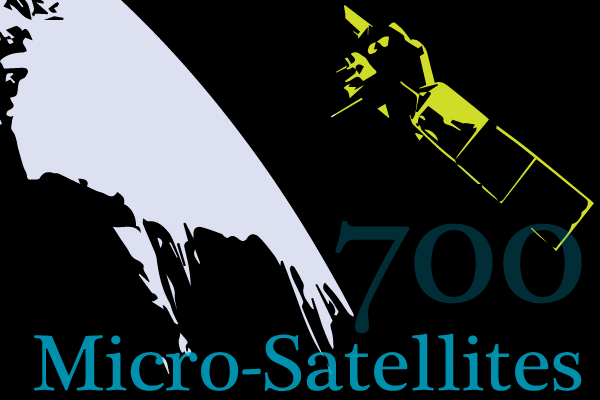 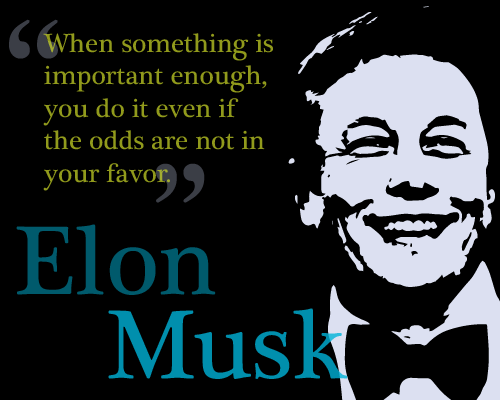 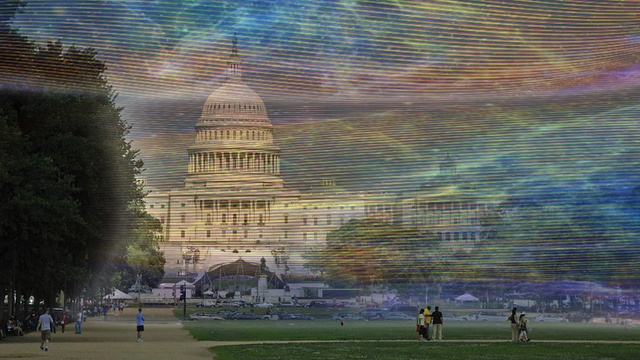 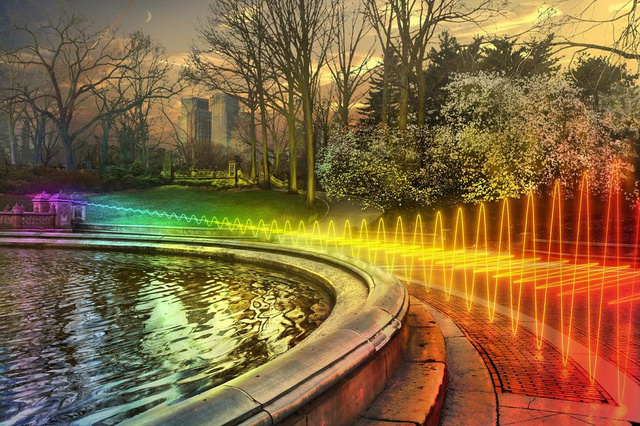 WiFi is technology that we have all come to appreciate. We appreciate the availability of WiFi at our local coffee shop, at parks, public libraries and public network locations. But what if we could see the technology with the human eye? These images created by M. Browning Vogel depict what visible WiFi would look like.

What is WiFi? Essentially, WiFi is a field of energy transmitted as waves. These waves have a distinct height and they travel at a distinct speed. Just like radios, cell phones and televisions, a wireless network uses radio waves. The distance between WiFi waves is shorter than radio waves, although it is longer than waves produced by microwaves. This provides WiFi from interruption by other signals.

WiFi waves travel through space quickly as pulses or waves that are data encoded. By a freeze frame depiction, the pulses display six inches apart. Various objects, such as trees, can block the signal. This requires that various WiFi routers be placed in different positions in order to ensure that coverage is flawless. Utilizing multiple routers can create a field that extends across large expanses in order to transmit over different frequencies.

WiFi routers that are fixed to lamp posts, buildings and other objects create a circular shape data field around the locations. These antennas produce an omnidirectional signal that extends in circular bands equally in various directions. The data transmitted over a band is divided into various sub-channels. The colors depicted in the images display such sub-channels.

WiFi transmitters are antennas with a transmission protocol that separates frequency band into segments or channels. Data can be transmitted efficiently over each channel to send and receive even larger data quantities, faster. WiFi fields are typically in the shape of spheres or elliptical and roughly extend for 20 to 30 meters.

Versa Technology is proud to offer comprehensive wireless solutions for any business or enterprise. The wireless access points available at Versa Technology are ideal for commercial use and are stable and reliable units.