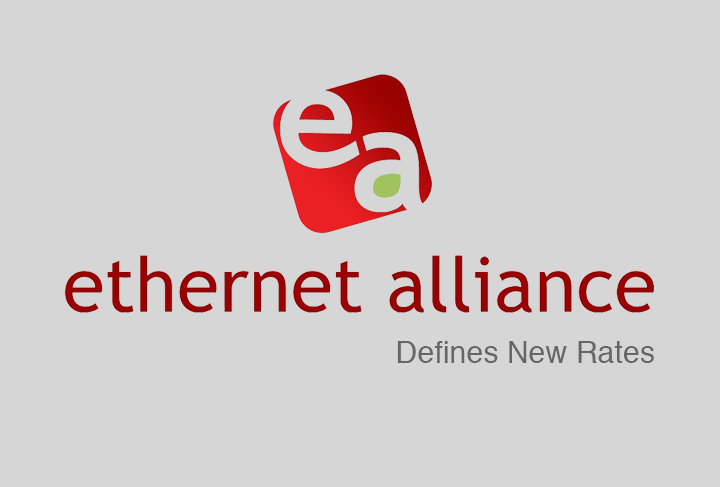 Last Week, the Santa Clara Convention Center in Santa Clara, Ca housed The Ethernet Alliance’s Technology Exploration Forum which discussed some of the latest developments in Ethernet technology.  Discussion topics ranged from the future of data center speeds, to the possibility of having 50Gbs Ethernet function as the unifying per lane rate, and Google even made a pitch that attempted to sell the benefits of utilizing FlexEthernet, “a technique [that] ratchets back on 400G data rates to save costs on links between routers and transport gear in core networks”.

The Technology Exploration Forum (TEF) is just one of the many resources that the Ethernet Alliance provides to IT professionals and networking companies seeking to take the pulse of Ethernet developments. The Ethernet Alliance was created to support and promote IEEE’s 802 standards but has become and educational hub with a library filled with press releases, whitepapers, webinars and videos. The alliance overseas other subcommittees such as Energy-Efficient Ethernet (EEE), Power over Ethernet, and Power over Ethernet Plus to name a few. In celebration of Ethernet’s 40th anniversary last year, Ethernet Inventor Dr. Robert M. Metcalfe delivered a keynote that defined Ethernet as a brand of innovation that promotes backwards compatibilit 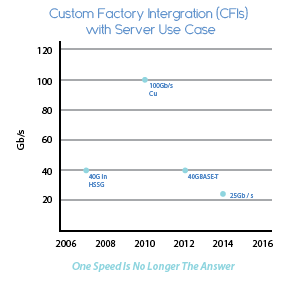 y, interoperability, and one that drives competition.

Intel’s Dave Chalupsky delivered one of the first presentations and he warned developers that they can no longer use server connectivity demands to predict future optimal Ethernet speeds because
servers no longer follow a ‘once size fits all’ model. His presentation outlines how hardware, applications, workloads, and end-user priorities in servers are oftentimes not taken into account when determining the next Ethernet rate to develop. With distinct storage and memory capacities, Dave Chalupsky predicts that in the future “Systems will be workload optimized, infrastructures will be software defined, [and] analytics will be pervasive” and critiques that current Ethernet “data rates are limited in comparison”.

The presentation set the tone for The Rate Debate, the theme of this year’s TEF, and discussed the development of the new Ethernet speeds currently in development.

In order to keep up with the faster 802.11ac Wi-Fi speeds that can have a throughput of up to 1Gb/s, proponents see a market for enterprises that want to avoid bottlenecks but don’t quite want to upgrade to 10-Gigabit Ethernet. 2.5 Gbps and 5 Gbps Ethernet, also known as Multirate Gigabit BASE-T (MGBASE-T), is the sweet spot for enterprises that do not wish to overhaul their networks with new cable. 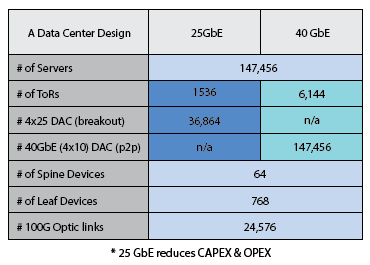 As cloud computing continues to grow, the strain on datacenters has influenced members to rethink how scaling will occur in the future. Networking specialists are expecting for datacenters to outgrow the previously defined 40Gb Ethernet, comprised of 10Gb Ethernet lanes, and are seeking to revamp efforts to make 25Gb Ethernet the scalable building block that can then be used to build 50Gb Ethernet. The project is currently led by the 25G Ethernet Consortium formed by Google after IEEE showed a short-lived reluctance to move forward with the project .

Core networks are also scheduled to get a speed boost by 2017 with a 400-Gigabit Ethernet standard underway that is expected to use 50Gbps or 100Gbps lanes. Presenters discussed “if the single-mode solution will use 8 wavelengths at 50Gbps or 4 wavelengths at 100Gbps…Another hot 400GbE topic is the CDAUI (8X50Gbps) electrical signaling that is pushing the limits of existing SERDES technologies”. The EA is burdened with the duty of choosing the specifications that will make this bleeding edge technology reliable.

Do you think these standards will future-proof servers? Let us know what you think!