HomeEnergy The Marcel Hotel Uses Power over Ethernet Technology to Become the First Net-Zero Hotel in the U.S. 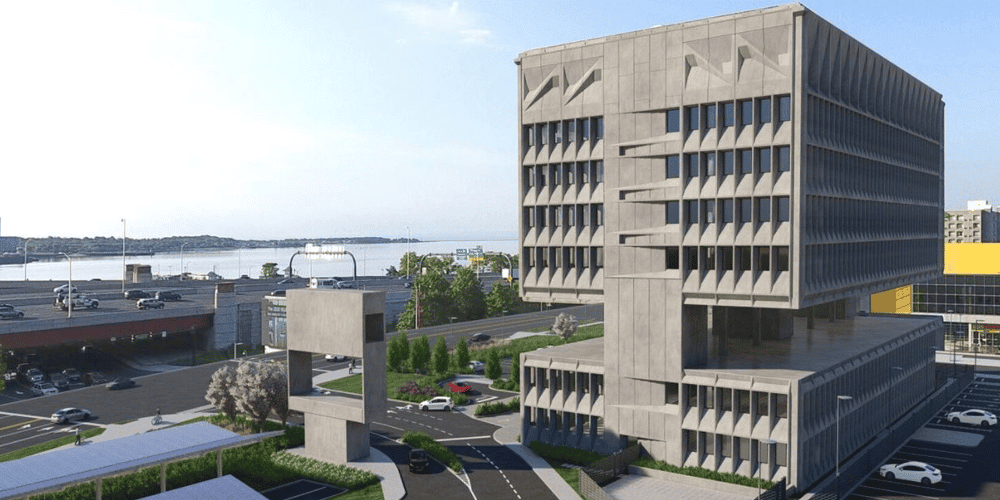 In May 2022, the first “net-zero” hotel in the country opened for business in Connecticut. Officially renamed Hotel Marcel New Haven, Tapestry Collection by Hilton, this 165-room ultra-energy-efficient building has an exciting story.

The building as it stands today has been retrofitted with a great emphasis on historic preservation. Previously named the Pirelli Tire Building, it hit the Business Insider list of the ugliest buildings in 2018.

This mid-rise structure was initially designed by Bauhaus alum Marcel Breuer (a Hungarian architect who came to the U.S. to escape Nazi Germany) as the Armstrong Rubber Company headquarters. The building was completed in 1970. At some point, the Pirelli Tire Company took over the property; then, somewhere around 2000, it became vacant and stayed that way for 20 years. It is currently listed on the National Register of Historic Places.

Architect and developer Bruce Redman Becker (of Becker + Becker, located in Connecticut) bought the vacant and neglected building in 2020, and the rest, as they say, is history. Becker noted recently to The New York Post:

“We found lots of dead pigeons! I have a passion for historic buildings. I love this building and have done for years, and my appreciation just gets greater working on it. There is a great poetry to it, but nothing is accidental. “

What is a “Net-Zero” Building?

A net-zero building, also known as a zero net energy (ZNE) building or a net-zero energy building (NZEB), is defined as a site that consumes only as much energy as it produces (clean, renewable energy, that is). ZNE structures are most often associated with commercial buildings; however, a residence can also be net-zero.

These properties must be “verified,”—which means they must provide 12 months of measured energy use and clean, renewable energy production data to the New Buildings Institute (NBI), which will issue a net-zero verification. 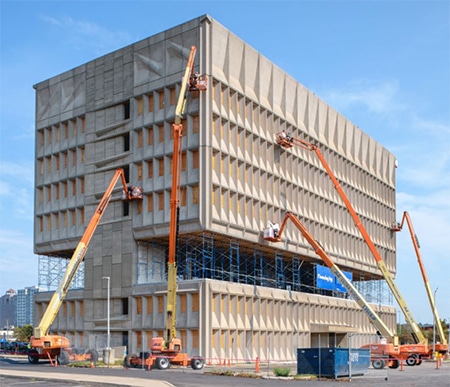 As Hotel Marcel is just beginning this validation process, it is considered an “emerging” net-zero building. In other words, Hotel Marcel has the goal of being a ZNE property but has yet to prove it.

Per the U.S. Energy Information Administration’s Commercial Buildings Energy Consumption Survey, traditional hotels use an average of 14 kilowatt-hours (kWh) of electricity and 49 cubic feet of natural gas per square foot.

“In the United States, where buildings are responsible for nearly 30% of the nation’s carbon emissions, zero-energy buildings will continue to play an important role as we transition to a low-carbon economy. Because so many of the zero-energy buildings we are tracking run entirely on electricity and include on-site renewable energy generation, they are proving to be a cost-effective way to reduce carbon emissions, achieve deep energy savings, and improve the indoor air quality of homes and commercial buildings.”

In transforming the old Pirelli Tire Building into the new Hotel Marcel, the main focus was reducing and producing the power needed to run the premises. The original building was built in the Brutalist style. It utilized large amounts of concrete and smaller-than-usual windows, both of which inherently keep heat and cool air from escaping.

In addition, the renovation has included: 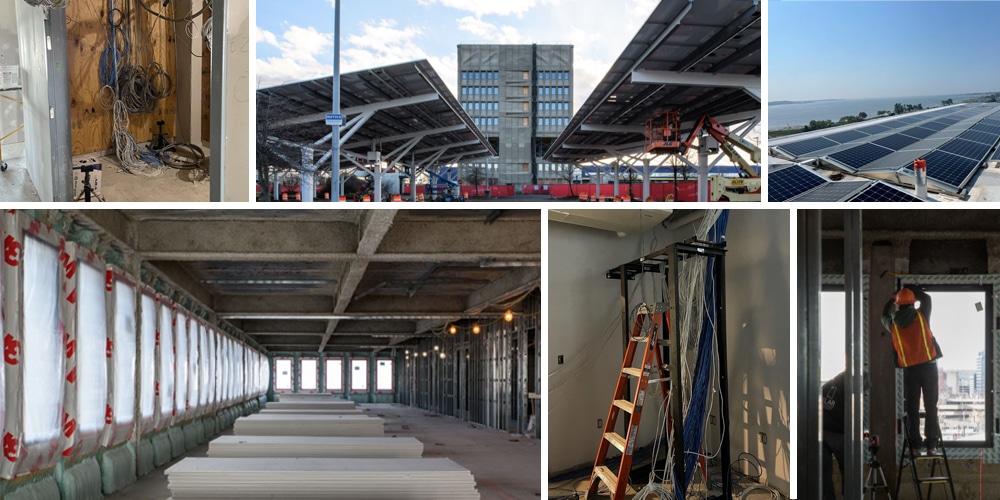 Regarding the LED lighting component, it is important to note that all the window shades in the hotel are motorized and can be completely “blacked out”. All lighting and shading is powered and controlled from a single IP-based platform.

Even the position of the building lends itself to energy conservation. Becker stated for The New York Times:

“ He definitely knew what he was doing, and it impacted the way the building was oriented, but Breuer was more interested in the architectural effect [than saving energy].”

A Word About PoE LED Lighting

As noted above, the Hotel Marcel is equipped with an LED (light-emitting diode) lighting system powered by PoE. Many energy efficiency experts see PoE LED lighting as the first step toward energy conservation—indeed, it is the most energy-efficient lighting system available today. The Department of Energy states:

“LED is a highly energy-efficient lighting technology and has the potential to fundamentally change the future of lighting in the United States.

Widespread use of LED lighting has a large potential impact on energy savings in the United States. By 2035,  the majority of lighting installations are anticipated to use LED technology, and energy savings from LED lighting could top 569 TWh [terawatt hours] annually by 2035,  equal to the annual energy output of more than 92 1,000 MW [megawatt] power plants.”

LED lighting can be powered by traditional electrical wiring methods; however, magic happens when combined with Power over Ethernet (PoE) technology.

What is PoE Technology?

PoE offers a unique approach to efficient lighting. With this technology, devices can be powered, connected, and controlled by a single CAT5 or higher Ethernet cable (CAT6A being the most solid choice). Traditional wiring provides voltages that are too high to be handled with Category cable; however, LEDs work perfectly with PoE’s low voltage output. As a result, PoE enables further energy savings and saves in many other ways, such as wiring and installation costs.

Versa Technology, Inc. is proud to be a reliable source of quality Power over Ethernet equipment. Visit our website to discover our vast array of PoE products.