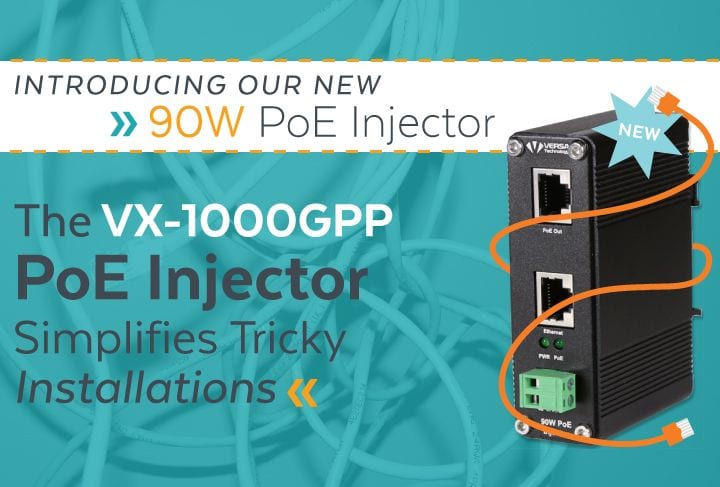 Versatek is proud to announce the release of it’s new VX-1000GPP Industrial Power over Ethernet (PoE) Injector. To many reading this article (looking at you installers and IT administrators) the convenience and savings of PoE technology will not come as any sort of a surprise.

For those of you who may be new to Power over Ethernet (PoE), we’ll answer the questions that probably spring to mind…

Let’s dive in and get a detailed view of what PoE injectors are specifically useful for, and why our new 90W injector is so special.

The PoE injector answers some big logistical problems that arise for organizations looking to upgrade and extend their infrastructure.

Unfortunately, infrastructure is often an after-the-fact consideration for businesses running in buildings constructed before the 80’s. Traditional installations of digital infrastructure in older buildings regularly caused lots of headaches (and cost a small fortune). That is of course, until PoE came along and solved the vast majority of these issues.

One reason it’s cheaper is that it takes advantage of existing infrastructure. Those existing copper phone lines? No problem! PoE networks won’t require recabling in these instances. 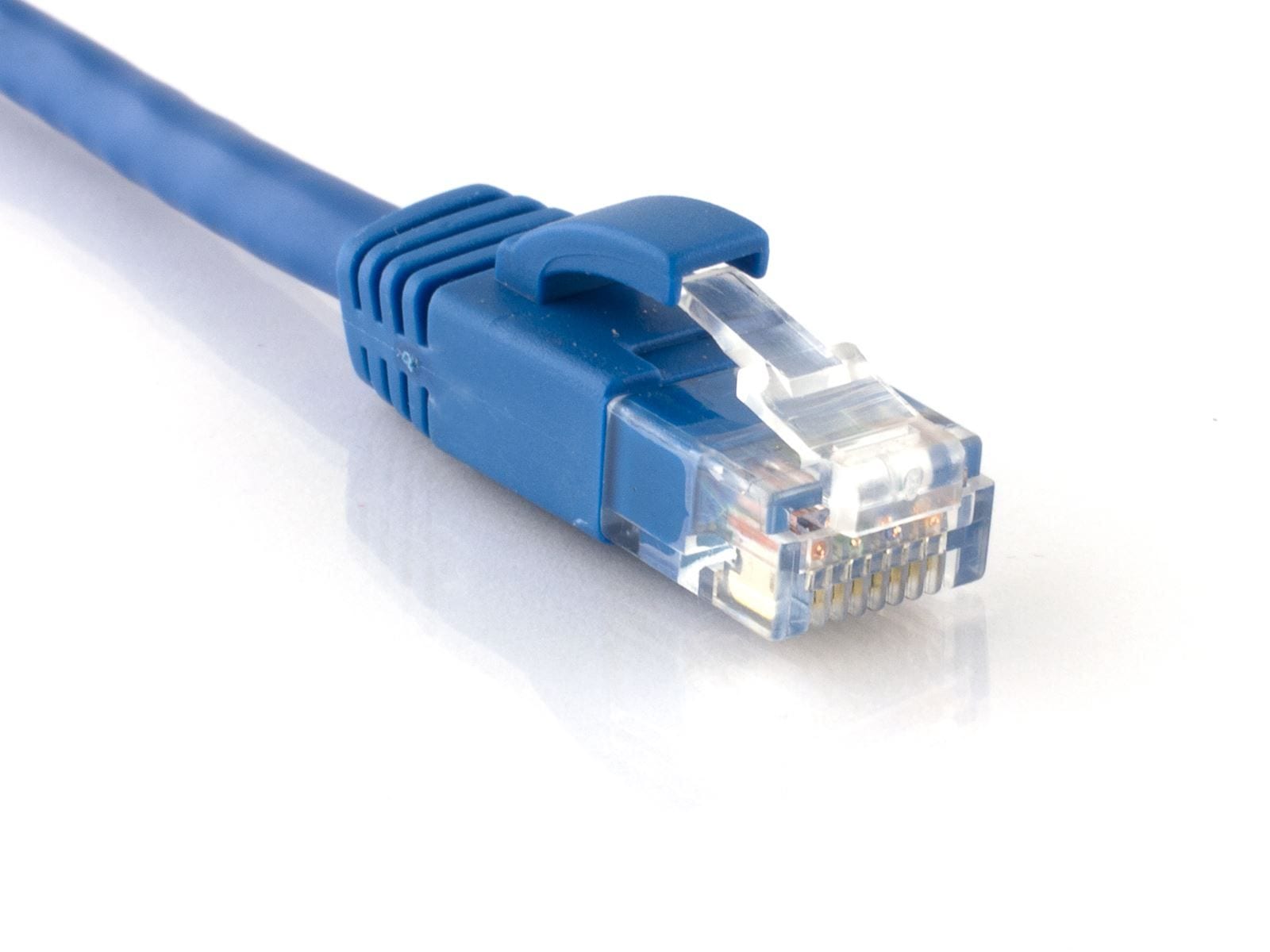 PoE works by way of twisted pair cabling, such as Cat5e and Cat6. This allows both data and power to be sent at the same time and through only one cable.

For further comparison, a regular data cable installation of Cat5e or Cat6 can cost anywhere from $100 to $200 per cable to install. That’s if there aren’t any walls to knock down or server rooms needed along with it.

Installing a standard power cable can easily run 2x that cost to fulfill even the most basic power needs. Keep in mind that nobody in their right mind will leave a power cable exposed. So you’ll need to consider adding the cost of drywall to these installations as well.

As you can see, it adds up quickly.

A PoE injector on the other hand, acts as a link. In other words, think of it like a midspan booster that improves the velocity and amplitude of data and power as they travel to devices from an Ethernet Switch.

Once installations begin, it’s easy to realize that every building is different. There are a number of variables that can have an impact on the required equipment for any install, whether it be the surrounding climate, the age of the building, or the condition of the existing power infrastructure.

Sometimes, a little history can serve as a great example.

One of the earliest examples of the “smart home” in the U.S. is the Thomas Jefferson Monticello mansion in Virginia. The removal of the original configuration and redesign of his second floor, allowed for natural cooling airflow in a climate where 100 degree indoor temps are the norm.

For the sake of argument, let’s say Thomas Jefferson was still around today, and that he was planning to add a few IP surveillance cameras to his historic mansion Monticello.

First off, he’d have to bend his desires for the latest technology to the historic preservation authorities. Some of you may have encountered that dilemma. He probably couldn’t just knock down walls and add a server room on the main floor. Government buildings and other historic properties are overseen by HOA like entities.

To install an IP camera, a project installer would need to find the least invasive option, perhaps underground through the basement or above in the attic. Such distances do not necessarily fall within the 100m limitation of PoE. Here’s where injectors really shine! 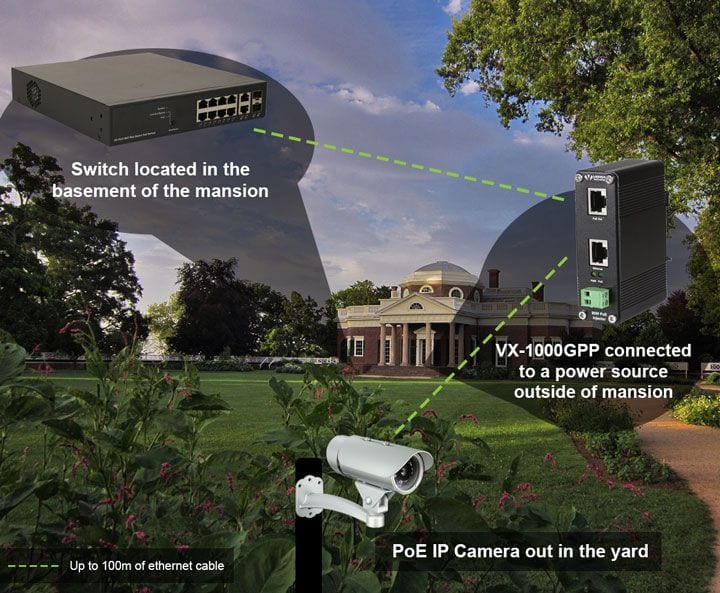 If this surveillance camera was further away than the typical 100m [328 feet] allowed for, the installer could boost signal strength through the use of an injector.

As long as an installer has a secondary power source somewhere near the injector, both data and power will reach the endpoint IP camera with more than sufficient power to do the job.

More watts means more power. The VX-1000GPP provides more power throughput than earlier models, enabling up to 90 watts to be delivered to a device.

The most obvious and influential benefit of this is that it expands the range of products that can now be powered via PoE (without requiring the installation of additional power cables).

The best part? Legacy devices, that are not necessarily PoE compatible, can also be powered through the use of an adapter.

As you can see, PoE injectors don’t only save installers and businesses money. They also save time since it’s far easier to add an injector than it is to physically relocate a switch.

With manufacturing on the upswing, PoE, adaptors, extenders, and injectors provide a cost effective opportunity for organizations to upgrade.

The VX-1000GPP model in particular was designed to handle fluctuations in environments like temperature and humidity extremes on shop floors, in warehouses, and other demanding deployments.

Additional Features of the VX-1000GPP

On paper, the VX-1000GPP is definitely impressive. It can deliver up to 90W of power and data, at speeds of 10/100/1000Mbps. Further, this delivery of power and data can be both to and from a single remote device in extreme conditions, all without the cost of running additional power cables. 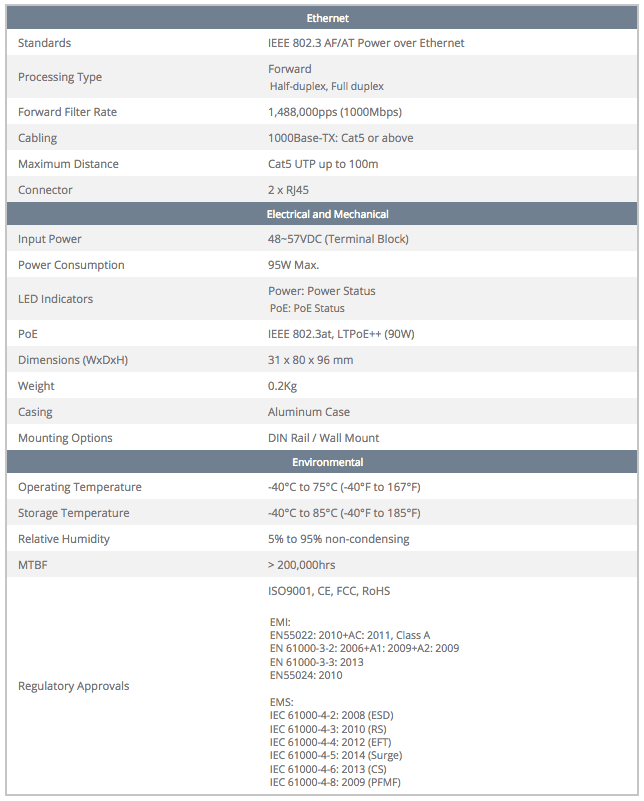 With the ability to handle extreme environments and power demanding devices like power access control devices and smart locks, this 90W injector opens the door on tons of new applications.

Who has the time or money to do a switch room build every time a remote device or lighting configuration needs to be installed? On that note, it’s worth mentioning that the VX-1000GPP is particularly well-suited for LED Lighting installations, especially as placement for LED tends to be architecturally driven.

Finally, the VX-1000GPP can power any device that falls within IEEE 802.3AT or 802.3AF classification. That includes not only the aforementioned IP cameras and smart locks, but wireless access points, digital signage and flat panel displays as well.

The suggested pricing for the new VX-1000GPP PoE Injector is $129.00, and it can be purchased here or from any Versa Technology Reseller.

To learn even more or get technical advice, don’t hesitate to reach out to our customer support team.