HomeTechnology What if Proposed Texas Legislation Became the National Norm for Cabling? 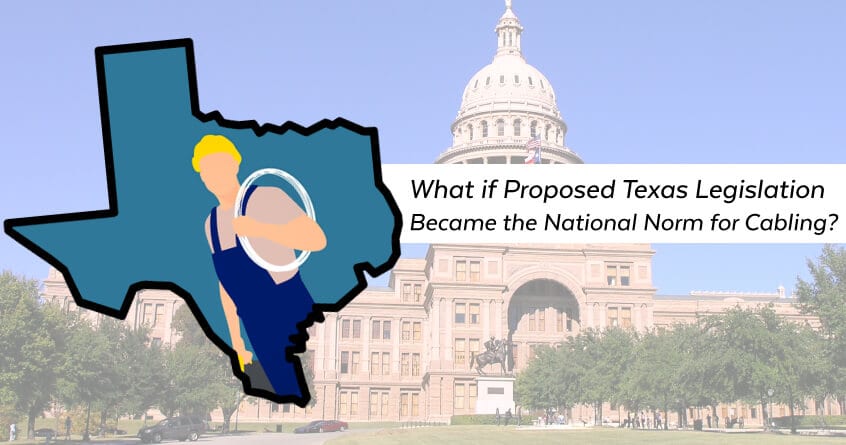 As of the spring of 2019, there were 2 virtually identical bills making their way through the Texas legislature: Senate Bill (SB) 1004 and House of Representative Bill (HB) 1141.

Backed by the International Brotherhood of Electrical Workers (IEBW), the goal of these bills was to classify any cabling circuit that supplies more than 50 watts of power as “electrical work” and would, therefore, be required to be installed by a licensed electrician.

Existing Texas law spells out the different types of electrical work that have a licensing requirement. It also states the type of work that is exempt from this requirement. One of the exemptions reads as follows:

SB 1004 and HB 1141 sought to add the following wording to the end of the existing exemption rule:

“. . . that operate at less than 50 volts (V) and that are not capable of supplying or controlling more than 50 volt-amperes or 50 watts of power.”

What are the consequences to the low-voltage industry?

If the proposed Texas legislation were to prevail, it would mean that circuits that support Class 3 or Class 4 PSE or PDs (powered devices) would fit within the parameters of the new law. Therefore, any circuit that supplies or controls more than 50 watts of power would no longer be exempt from the electrician license requirement.

In short, people are put out of work and costs go up.

For now, both these bills’ status is “Adjourned Sine Die” (in plain English, this means “adjourned without a day”–meaning “adjourned for the session”). The 86th Texas Legislature began on January 8, 2019 and concluded on May 27, 2019. It won’t meet again until January 12, 2021 (unless the Governor calls an emergency session).

So, in effect, both these bills are dead for the near future. Emergency averted.

However, there was recently a similar building code change being proposed in Utah that would lower Class 2 wiring voltage from 100V to 50V. Changes like these would prevent audio-video (AV) integrators from installing distributed audio systems.

A grassroots effort was initiated to defeat this bill–the rationale being that this rule change was a possible attempt to capture work, rather than a safety or training issue (which was how it was proposed).

Thanks to these efforts in the Utah low-voltage working community, the bill has been removed from the pending rule hearing.

What do these types of legislative endeavors mean to the PoE industry?

Jason Potterf of Cisco, who recently testified against SB 1004 in Texas, states: “This is going to be a multi-year fight. We’ve seen a flurry of PoE targeted legislation over the past 6 months in multiple states, and anticipate next year will be no different. However, we’ve successfully defended PoE from these attacks in all cases and believe it will prevail in the future due to its inherent safety features.”

Kelly Ryan, president of the Texas Burglar & Fire Alarm Association (TBFAA), was also in attendance during the Texas bill hearings. He states, “The Texas Burglar & Fire Alarm Association (TBFAA) strongly opposed HB1141 and SB1004. During the public comment portion of the Texas House Licensing & Administrative Procedures Committee, TBFAA testified against HB1141 as we felt the proposed language was an immediate threat to low-voltage jobs throughout the state. While representatives for the electricians testified that HB1141 was needed to protect people from shock and fire hazards of PoE circuits, they gave no specific incidents to support their claims.”

This wrangling is happening because of the trend toward Light Emitting Diode (LED). The current form of this technology (which has been around since the ‘60s) has revolutionized the lighting industry and makes it easy for low-voltage integrators to install lighting fixtures.

In response to this low-voltage trend and because of the ever-changing new technology in this field, the IEEE recently amended 802.3 standards. These standards define Ethernet-based networks.

Lighting is going low voltage and this concerns many electricians right now. The new proposed legislation is a struggle over the demarcation of this Ethernet-based technology. Everybody’s trying to find their place in this overlap between AV and electrical work.

Is there other proposed legislation out there?

The National Systems Contractors Association (NSCA) is the leading non-profit organization representing the commercial energy industry. In particular, they advocate for all workers in the low-voltage trade.

Per the NSCA, the early part of 2019 saw the introduction of an unprecedented amount of licensure bills. This association feels that many of these bills are the result of adjacent industries using legislative measures to capture or control trade jurisdiction.

Following, is a snapshot of the main bills that the NSCA is monitoring at this time:

For further information regarding these bills, please visit the NSCA at www.nsca.org/track-legislation.

There are 70+ more bills that the NSCA is monitoring–and there are many other industry-related issues of concern: code changes, legislation governing connected devices, cybersecurity laws, intellectual property rights, school safety regulations, payment and obligation, apprenticeships, and many more.

As quoted above, this truly will be a “multi-year fight.”

Now, more than ever, it will be important to be an informed representative of the low-voltage industry.