HomeUncategorized What is a PoE Extender? 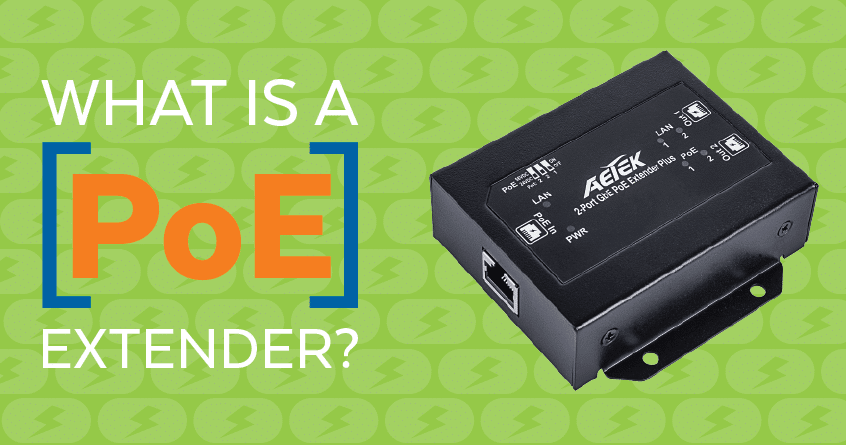 Images from an IP surveillance camera operating over a Power over Ethernet (PoE) network is limited by a distance of 100 meters between ports. If your IP camera must be set up over 100 meters from its network source (LAN), you will need at least one PoE extender as your receiver signal will lose integrity beyond that distance.

The 5 Different Types of Extenders

PoE passes electricity and data on a pair of twisted CAT5e or CAT6 cables. The various PoE extenders plug into your new or existing IP camera system, allowing you to view images from distances up to 4,000 meters (roughly 2.5 miles). It’s designed to extend your TCP/IP network by increasing voltage and boosting your network’s signal. There are 5 types of Ethernet extenders to choose from:

PoE extenders provide relatively inexpensive solutions to IEEE802‘s distance issue. That’s where they differ from using a PoE switch to achieve distance. Although you can plug several cameras into the switch, your switch can’t be plugged in directly to your Network Video Recorder (NVR). PoE extenders can be plugged directly into your NVR, but with one caveat: it can only connect one IP surveillance camera.

You might wonder why you need an extender if your system is already using a PoE injector. They have two different functions. A PoE injector simply powers up your non-PoE enabled camera to make its images viewable by your network. PoE extenders increase the distance that you can use for your IP devices and do not require a power source.

By definition, however, a PoE extender is also a PoE injector since it makes images viewable by your network by reducing the amount of cabling needed.

Should You Use a UTP or an STP Extender?

It depends on your application. UTPs are less expensive and do a good job of reducing noise. However, if you suspect or know that you will have excessive electromagnetic (EM) interference between your camera and NVR due to camera placement, STPs will shield that noise. STPs are commonly used when you install IP surveillance cameras at a venue that uses sensitive machinery like hospitals or airports. But if you’re installing surveillance cameras within an office building for instance, using UTP will work just fine in most cases.

How Many PoE Extenders Will Be Needed?

The rule of thumb is one extender to one camera and one NVR. If you are setting up an IP surveillance camera greater than 100m from your network without an extender you will lose signal integrity. Why? Because CAT5e and CAT6 cables would not be able to handle wattage load as the twisted cables are usually the standard 22 gauge.

Your extender will have a PoE in port and a PoE out port. Connecting your PoE extender to your IP surveillance camera is simply a matter of plugging it inline. You connect the cable to the PoE in port from the NVR or PoE switch. The PoE out port connects to your IP camera. No matter how many PoE extenders you use, your IP device requires at least DC38 voltage left at the camera to work with your NVR.

Most IP surveillance cameras that exist in a building will work fine within the standard 100m distance. How much is 100m? It’s 328 feet or about 1.1 times the height of the Statue of Liberty, including the pedestal. Visualizing that distance, you get an idea of how easy it is to lose your camera’s signal after 100m. Using the 100m metric, you will be able to make an educated guess of how many extenders that you will need to make your project work. For instance:

So for every 100m of distance, use an inline extender, dependent on your application. Outdoor cameras setups should use weatherproof, outdoor IP66 rated extenders while indoor cameras don’t need to be. However, if your cameras are lodged in a building with sprinkler systems, waterproof. 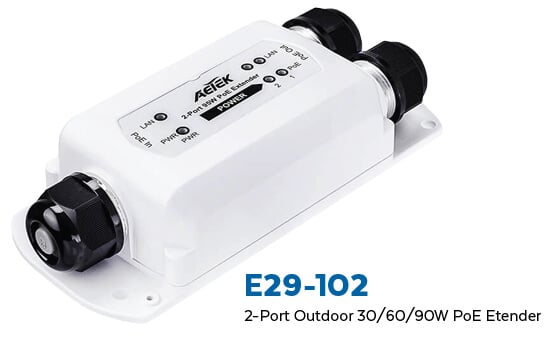 The Future of PoE Extender

One looming consideration is whether PoE extenders as we know them today will become legacy in the near future as cabling trends toward CAT7 and CAT8. Looking toward scalability and interoperability with current systems, today’s PoE extenders currently work best with CAT5e and CAT6 since CAT7 and CAT8 aren’t approved for telecommunications yet.

But according to a white paper authored by Jean-Jacques Sage, Marketing and Innovation Director of Nexans, the United States PoE growth rate through 2025 is about 20 percent. With that PoE growth rate coupled with the ongoing innovation of the IoT, as technology increases gigs, extenders will most certainly be updated to make IP surveillance cameras work over the faster data lines and in remote locations.