HomeTechnology What is Energy Harvesting? 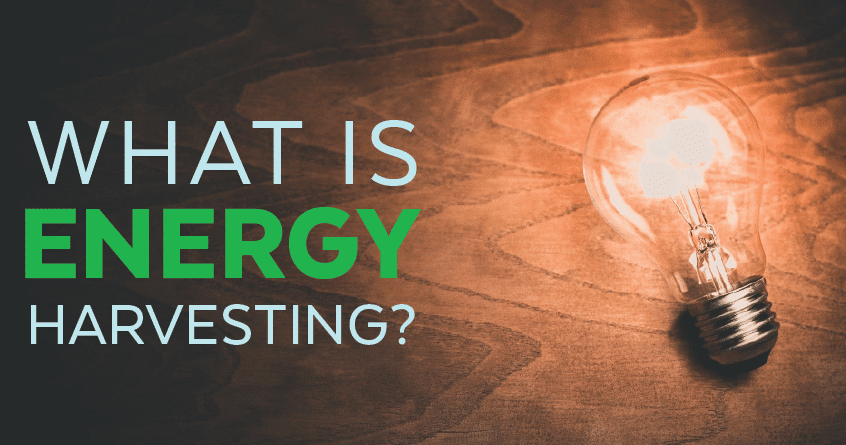 We live in electrifying times—and we mean that literally!

We are reaping the benefits of the Third Industrial Revolution—the digital revolution that has been occurring since the middle of the last century. Our world is now positioned in the first stages of the Fourth Industrial Revolution, complete with Internet of Things (IoT) connected devices and non-IoT connected devices numbering in the billions. According to Statista, there will be just over 10 billion non-IoT active devices by 2025.¹

Here’s where the challenge comes in: Those 10 billion devices need energy currently supplied by batteries. Examples of these battery-dependent devices are:

Installing, maintaining, and replacing billions (maybe even trillions) of batteries is a big logistical nightmare. In addition, improperly discarded lithium-ion (Li-Ion) batteries leak into the soil at landfills and cause air contamination. They have even been reported to have exploded and caused fires. Another problem is the expectation that many lithium-ion raw materials will be scarce by the middle of this century.

One alternative that is currently emerging is the Zinc-ion battery, which is not as caustic and explosive and is made up of raw materials that are still quite plentiful. However, it is still a battery.

It’s all about energy

According to ONiO, a healthcare-focused semiconductor company that brings self-powered, batteryless solutions to the IoT market:

Globally, we use about 607 quintillion joules of energy each year. Our energy needs are only increasing, with our rapid population growth, and global energy expenditure is expected to be around 777 quintillion joules by the year 2040. These are mind-bending figures and it is no wonder then that issues of energy and energy shortage feature so prominently in global policymaking.²

Because of these nearly unfathomable numbers and the fact that many of our energy sources are finite, we are constantly hearing about the need for renewable, environmentally-friendly energy sources.

So, here is where energy harvesting comes in.

What is energy harvesting?

Energy harvesting (also called energy scavenging or ambient power) captures small amounts of ambient energy and converts it into electricity. This harvested energy can either be used immediately or stored for use later. Energy harvesting is in the first stages of development. It shows signs of potential for providing electricity to areas with no power grid and where the installation of wind turbines or solar power is inefficient.

What is ambient energy?

As we move about our daily lives, there is energy all around us that is going to waste. There is electromagnetic (EM) energy from cellular, TV, and radio transmitters and from satellite and other wireless communication systems. There is energy from light, heat from the sun and the earth’s interior, wind, ocean waves, river currents, and sound waves that simply dissipate into the ether. Even when you walk down the street, you generate energy. The movement from your arms and legs generates kinetic energy; the friction with your clothing as you move generates thermal energy. The idea of energy harvesting is to capture this wasted energy and convert it into electricity to power a device.

How does energy harvesting work?

As mentioned before, energy harvesting is still in its early stages. However, there are still some interesting energy harvesting applications available today. (More about this later). Energy harvesting works differently based on the source, amount, and type of energy being harnessed. There are four basic sources of energy: 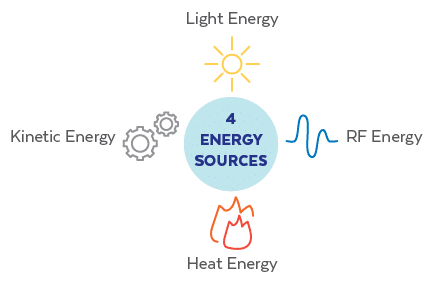 In its most basic form, the energy harvesting system needs energy waste from one of the sources listed above, plus the three following components: 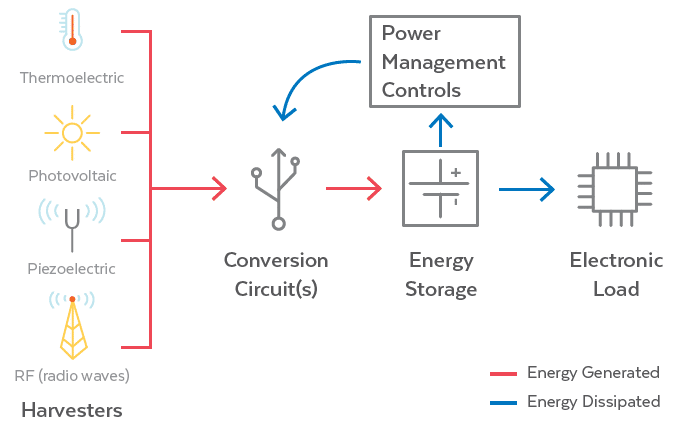 Figure (A) Basic components of an energy harvesting system.

What are the benefits of energy harvesting?

The good news is: There is lots of ambient energy around just waiting to be captured and converted into electricity to power circuits. And there are several compelling reasons why we should do so. Energy harvesting:

What are the main applications for energy harvesting technologies?

Energy harvesting is a great way to extend the battery life of remote sensors found in commercial, industrial, and medical applications. For example:

What is the future of energy harvesting?

According to the EE Times:

So, what will the future look like as energy harvesting develops?

Following are a few examples of things companies are now investing in:

As an extension of such technical development [described above], there may be a future where artificial intelligence (AI) acquires physical knowledge and sensation by perceptually learning tactile information. The AI implemented in a robot can obtain visual information as an image that contains kinetic information converted into light intensity. In addition, the AI learns as visual information of the motion commanded by the AI itself does not necessarily produce the result intended by control signals because vibrational energy harvesters are independent power supplies.⁴

Scientists feel there is real potential for energy harvesting to become a powerful tool for the sustainable development of our world. Even though the energy being currently harvested is small (measured in mere milliwatts), this converted electricity is able to provide power for embedded systems, wireless sensors, and other low-power applications—and it seems to have a great future!

Figure (A): Image courtesy of harvesting-energy.com

(1) Statista: Internet of Things (IoT) and Non-IoT active device connections worldwide from 2010 to 2025

(2) ONiO: What is Energy Harvesting?

(3) EE Times: Energy Harvesting is the Future of Power Supply