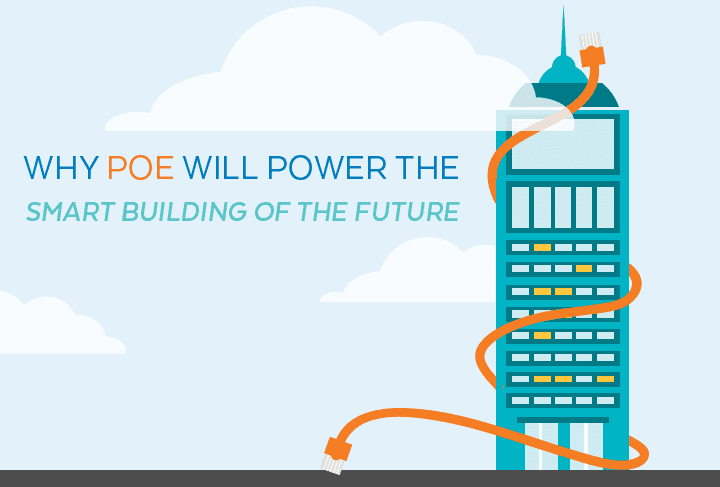 You know Power over Ethernet as the cabling technology used in information technology that transmits both data and power using a standard Ethernet cable. PoE gives users the ability to deploy powered devices at any location, regardless if electrical outlets are present. It is this characteristic that makes Ethernet the ideal default cabling medium that will connect the smart building of the future.

One of the main advantages in utilizing Ethernet as the main cabling technology is its ability to give each connected device its own IP address. Utilizing the universal cabling medium simplifies the management, configuration and maintenance of the connected devices. With Ethernet, network administrators and system integrators can rely on the universal language of TCP/IP to troubleshoot devices helping maintain operational costs low.

Leveraging the Simplicity of PoE for Smart Buildings

Siemon ConvergeIt, a network cabling solutions provider, has released a demonstration video showcasing how Ethernet can power the ecosystem of a smart building. With Ethernet, powered devices can rely on Power over Ethernet (PoE) for power. PoE allows system integrators or network administrators to deploy powered devices at any location, regardless if a site is devoid of electrical outlets. PoE also eliminates the need to add new electrical power outlets in a building which requires professional installation and conduit permits. PoE can deliver power to low-voltage devices, up to 30 watts of power under the current highest-powered standard, 802.3at. However, IEEE currently has a new PoE standard in the works, 802.3bt, that will deliver between 60-100 watts of power.  Though the standard is expected to finalize in 2017, there are many 802.3bt readily available for customers seeking greater power output. Visit our sister site, PlanetechUSA to view our full suite of 802.3bt Ultra PoE networking gear. 802.3bt utilizes all four twisted copper wire pairs to deliver power and data.

In addition, utilizing Ethernet as the main cabling medium simplifies the notion of transforming a traditional building into a smart building. Though there are a myriad of smart devices designed for smart buildings, utilizing Ethernet eliminates the need to settle on one particular connectivity standard. Enterprises can re-use their existing network switches to power a PoE Lighting system for example.

Smart buildings combine energy efficiency and technological innovation to create a dynamic networking environment of interconnected devices that offer remote control. Higher-end/higher-tier smart buildings support smart devices that can communicate with other devices without the need for human input. With Ethernet, many of the components that communicate with the internet gives users the ability to customize their preferred settings via an app.

The Edge, a smart building located in Amsterdam, exemplifies this type of technological innovation.  Touted as the greenest and smartest smart building, the smart building reuses rain water to flush toilets and to irrigate plants. It also features an atrium to make use of natural sunlight. The building received a 98% BREEAM score, a benchmark that attests to its sustainability. Furthermore, the Edge gives its office workers the ability to customize lighting and other HVAC (Heating Ventilation Air Conditioning) components via an app. The building uses a concept known as “hot desking”, a seating arrangement where workers don’t have any pre-assigned seats. With PoE lighting, office workers can utilize the app to see vacant seating areas.

Instead of having these components operate independently, The Edge exemplifies a modern smart building that integrates components such as Lighting, HVAC Systems, access control and other smart devices into a dynamic ecosystem that inform each other. The edge integrates technology from the moment an employee enters the building. A camera will identify a member’s license plate to permit access the building’s parking. Towel dispensers in bathrooms for example, notify janitors when bathrooms are experiencing particularly heavy traffic. In addition, because the Edge comes with PoE lighting with occupancy sensors, the smart building knows which rooms have remained unused and can be skipped for cleaning.

Power over Ethernet can be used to power LED systems such as a Phillips’s Light over Ethernet (LoE) Led systems. Many LED lights powered by PoE also integrate sensors to better monitor the usage of a room. An occupancy sensor for example, can be programmed to collect historical usage data and even notify cleaning personnel when to skip cleaning un-unsed rooms. Office workers can also utilize the app to find their colleagues, remind the espresso machine of their preferred settings, pair their smart phones with LCD monitors, and even order their favorite meals from the building’s cafeteria. To learn more about how PoE lighting works, click here!