HomePoE IP Camera Systems vs. Analog: Which Is Right For You? 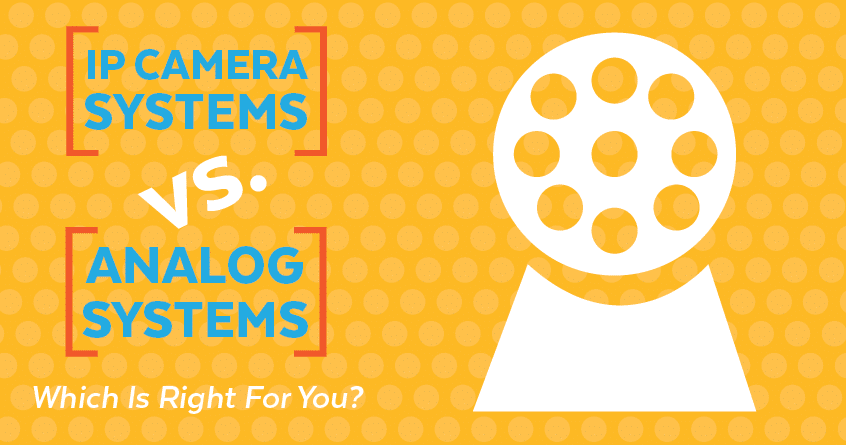 Internet Protocol (IP) and analog camera systems continue to dominate company surveillance strategies despite top technologies like artificial intelligence and the Internet of Things tops in cybersecurity trends in 2020. Since IP cameras don’t have the cabling requirements that analog cameras have and have more megapixels for higher resolution, they tend to be holistically cost-effective, especially in the long-run. On the flip-side, analog cameras have come a long way from the basic closed-circuit domes recording images for perusal later. Today’s analog can eliminate some cabling by using video baluns with CAT5e or CAT6 cables, better leveling out the playing field. With two classically different choices, which would work best?

It depends on your company needs and budget. Some buildings, especially many older buildings, are coax-wired for analog closed-circuit television (CCTV) and it might not make a lot of sense to stakeholders to update to an IP camera system or perhaps a hybrid analog/IP camera system. Many might argue that analog is outdated and that the features and functionality of IP camera systems make conversions and updates a no-brainer.

Digital’s been around so long that many people forget that analog, once king, is still part of the surveillance camera landscape. IP camera initial imaging is analog, but that image gets converted to digital long before it hits your Network Video Recorder (NVR). IP camera systems allow greater distance from your local area network, making high-quality surveillance less cumbersome. According to a recent report by Technavio, the IP camera market will grow by $8.47 billion from now to 2024.

Pros to the IP camera system include:

An IP camera system can cover up to 1.5 miles from your LAN, more than analog with help of wireless access points (WAPs). But if you’re not needing that kind of coverage, analog may work for you.

Analog cameras work over coaxial cables not a LAN network so you really don’t need to worry about how much bandwidth you’re using. If you’re trying to use analog cameras on a wireless network, be prepared for interference and distorted views from cell phones and fluorescent lighting. Since analog cameras work within a closed-circuit system, there’s traditionally not a lot of flexibility. But that’s changed as baluns work with analog cameras especially in buildings already cabled with CAT3, CAT5, CAT5e and CAT6 wires.

Analog is the most basic, but HD analog adds scalability by adding the ability to convert to IP systems.

Perhaps you’ve installed an analog system or are nursing along an analog legacy system and find that it’s not doing the job you envisioned it to do. Do you need to dismantle it and start over or can it be converted to digital? Unless your analog system’s cameras and DVR break down and need replacing, you don’t have to tear out the analog system and convert to an IP camera system.

If you’ve got the bones, meaning the coax or the CAT cables throughout the building, already in place, your stakeholders may want you to make use of it. If your existing DVR is not network-enabled, replace it with a network-enabled DVR. You will need an Ethernet cable, a PoE switch, and an analog-to-IP converter so that you can view your images through your browser. The conversion process tends to some expense depending on how many cameras you are enabling. You won’t need to convert every analog camera to IP if you’re going hybrid.

Andreas Conrad, head of Marketing for Qognify says that cybersecurity is “an interaction of cameras, network, hardware, VMS, interfaces/integrations — if there’s a gap in one of these areas, the whole system is in danger of being insecure.” While surveillance may be trending to the edge of AI and the IoT, the market for both analog and IP camera systems isn’t going to become legacy anytime soon. Both are secure, but your choice will run to location, imaging needs, and budget.