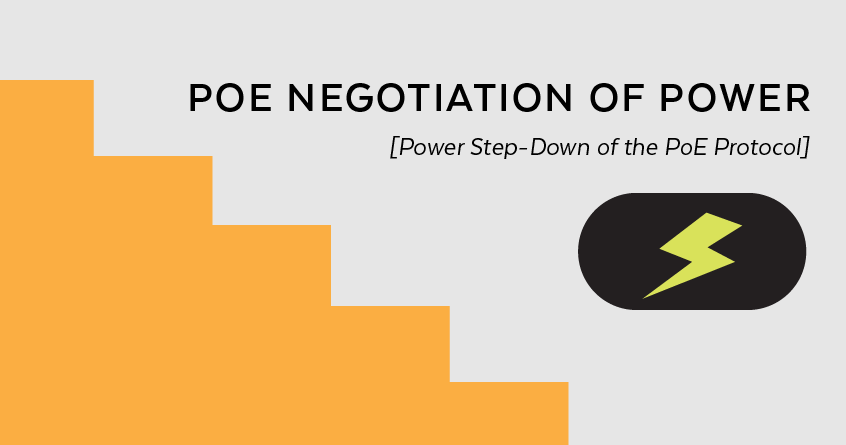 With so much focus on smart home and business technologies these days, it’s clear Power over Ethernet (PoE) technology will continue to drive smart device development. Every year we see new ways to make life more efficient and save money. Dream Home Inspection recently reported the average monthly savings from using smart home products is $98.30, which adds up to an average of $1,179.60 per year. These newer smarter technologies are bringing with them higher power budgets, some are now reaching 90W and beyond, and some consumers are wondering if they can safely combine these powerful, feature-laden devices on the same networks with their 30W and 60W legacy powered devices. Happily, the answer to this question is a resounding yes, thanks to something called PoE Power Negotiation and Power step down.

PoE power-step down is an IEEE PoE protocol that allows a power device like a PoE injector or switch to detect the presence of the device receiving power, before negotiating the power level it delivers. Once this detection process is completed, which includes the identification of the exact power levels the receiving device actually needs, the power sourcing equipment (PSE) can safely send power. In fact, it literally “steps down” the power to what the powered device (PD) requires.

Power Sourcing Equipment (PSE) for these installations is a device that is capable of providing PoE such as a switch or injector.
Powered Device (PD) is a device capable of receiving PoE from a PSE.

To paint a real-world picture of how a power negotiation or step-down procedure works this will take you through the steps on your network.

A PSE (switch or injector) classifies an 802.3af or 802.3at PoE device and initiates a step-down under the IEEE standards for the power budget of Type 1 and Type 2. If you’re new to injectors, they are midspan devices that can extend the reach between a switch and a remote endpoint installation such as a small network, a security checkpoint or a coffee kiosk on a business campus.

Let’s track through the steps of how a power transaction would take place.

The Two-Event Classification Sequence before Power-Down

The first handshake. The PSE detects a connected PD by sending a short low-voltage pulse which determines how much power the PD needs. This pulse is unlikely to damage a non-PoE device. Depending on how much current it draws during this pulse, the PSE classifies the PD into one of classes 0-4 (0-3 / type 1 PSEs and PDs).

Here’s how type and class levels communicate in the second handshake between PSE and PD.

For example, the second handshake is required for a type 2 PSE to classify the connected PD into class 4 (PoE+ power), informing the PD that full 802.3at power is available.

The PSE now has confirmation that a type 2 PD connection took place to the port, ensuring that the PD device is secure from a power burst. Before this second handshake takes place, the PD and PSE restrict power to within 802.3af limits.

This second handshake takes one of two forms:

The 802.3at standard mandates that PSEs support only one of these mechanisms. PDs, however, must support both classification methods to ensure the capability to join a variety of networks.

This method was initially intended to be used by midspan PoE injectors, as they generally won’t support LLDP required for software-based classification.

For the software-based LLDP classification, LLDP must be enabled on both the PSE and PD, with the 802.3at TLVs enabled. This step allows the PSE and PD to negotiate power requirements via software, rather than the second classification pulse used in the hardware-based method. This step also allows power requirements to be dynamically negotiated, allowing a PSE’s power budget to be better managed. 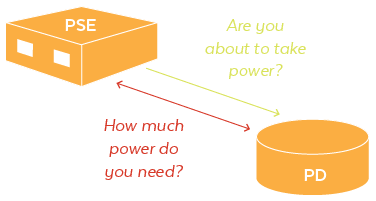 Power negotiates over Ethernet Layer 2 LLDP, informing the Ethernet Switch and the powered device-specific details about that power:

The end result of this power awareness by the actual connected devices is that networks are going to become much more energy-efficient, not only as a way to optimize how PDs and PSEs interact, but in overall usage. Nothing wasted.

Not just in terms of device health but in terms of automation, the Step-Down function is part of a larger, ongoing IoT trend where devices talk directly to each other, saving time for administrators and allowing them to prioritize in other areas. Look for both devices and communications to continue to expand and develop along these lines.

Learn more about Versa’s flexible IT networking solutions including our extensive line of Ethernet Switches and Industrial Switches.